“Something like the nail art design might include the positions of the hands, the angle of the pseudo-photographic shot, and instructions for tweaking the prompt to produce different manicure styles and themes.” 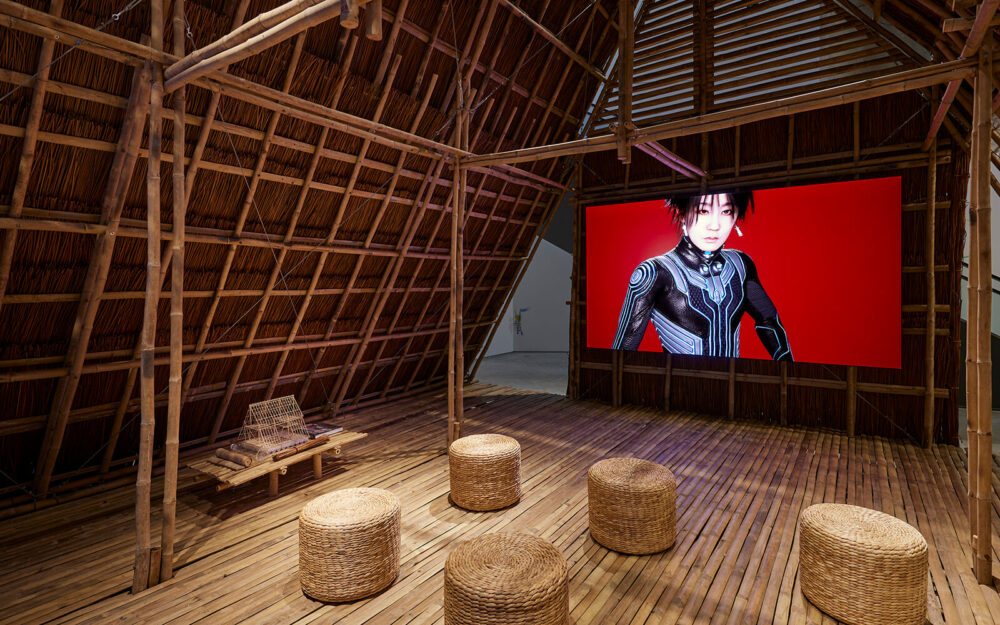 Imagining a future on a rapidly changing planet, “The New Earth” opens at Public Works, Chicago. Ten artists including Jeremy Bolen, Susan Goethel Campbell, Sam Rolfes, and Kat Jarvinen provide “a testing ground for addressing the preeminent issues of our time,” from AI to climate change. Jarvinen’s Feral Devices (2021, image), for example, disrupt waste cycles and assumptions about technological decay in search for “alternative realities for those things we throw away.” 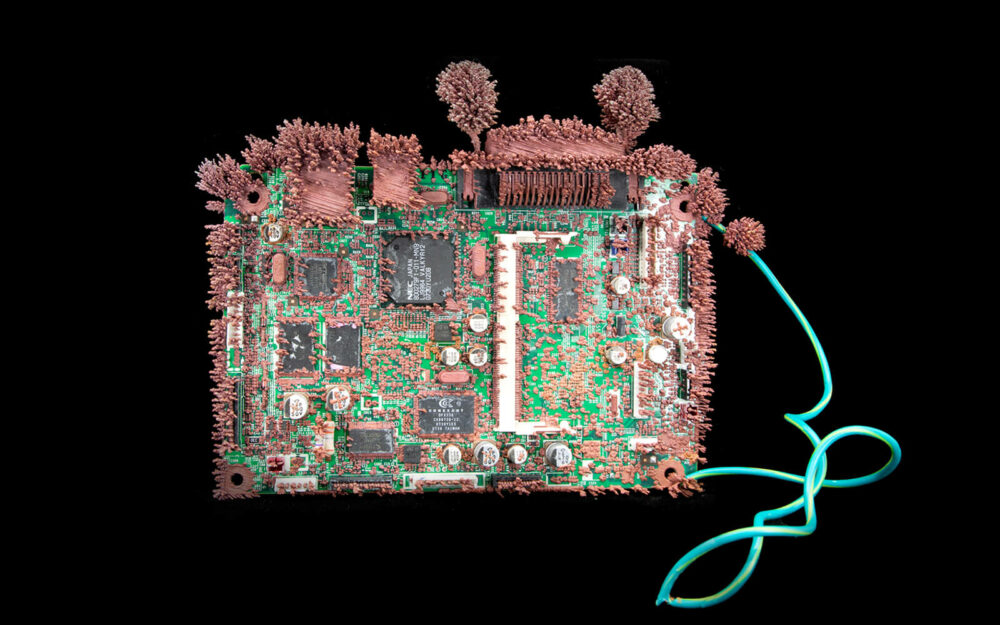 “Of the 13 projects examined for the study—accounting for about 55% of the world’s current operational capacity—seven underperformed, two failed, and one was mothballed.”

– Guardian reporter Damien Gayle, on the abysmal track record of current carbon capture and storage (CCS) solutions revealed in a major IEEFA analysis. “Many international bodies and national government are relying on CCS to get to net zero, and it simply won’t work,” IEEFA researcher Bruce Robertson says.
The Guardian
● 01/09/2022 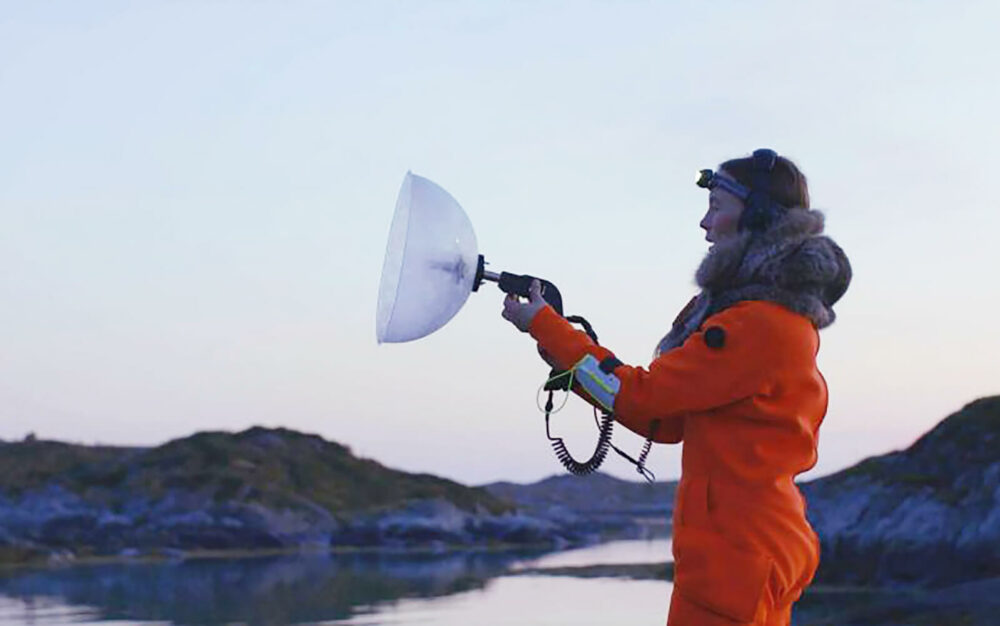 From 15th Century painting to NFTs: “Meta.Space: Spatial Visions” opens at Francisco Carolinum in Linz, Austria, gathering over 30 artists that examine “social, real, and imaginary space.” Next to the virtual worlds of late luminary Herbert W. Franke, for example, towers the site-specific ‘crypto sculpture’ by Alexander Grasser and Alexandra Parger. Open Architectures (image) is a wooden model of one of 50 community structures built collaboratively via interactive NFT.

Leaning in to notions of immateriality and the technological sublime, “Digital Art Waves” opens in Paris. Featuring artists including Kika Nicolela, Manfred Mohr, Quayola, and Nicolas Sassoon, whose contributions range from prints on paper and metal to video and NFTs. Sabrina Ratté, for example, reconstitutes her reflection-heavy 2016 CGI video piece Wintergarden, which “straddles the line between abstract architecture and an enclosed garden,” as an NFT (image). 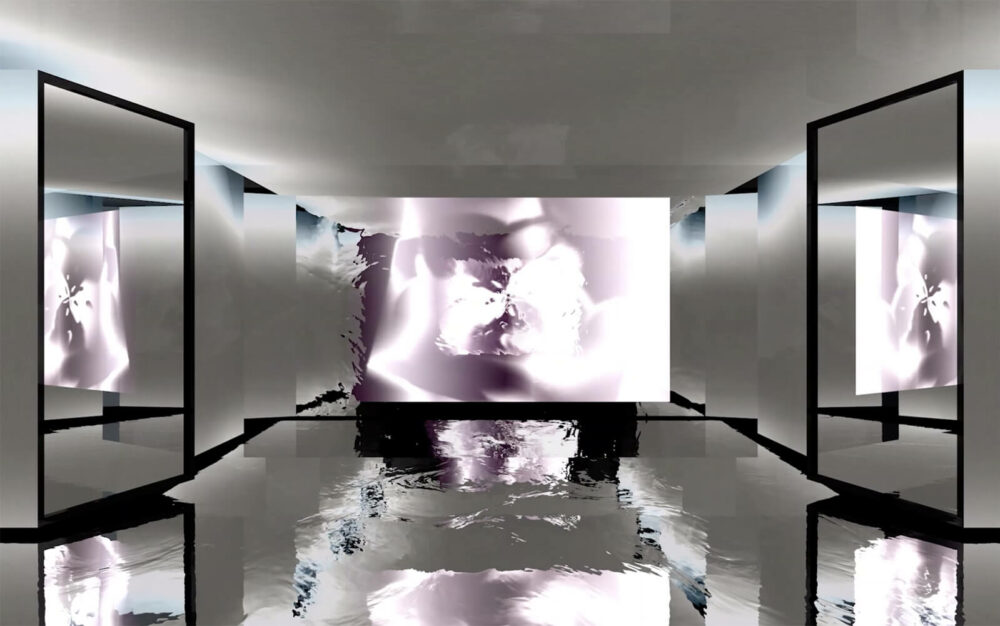 “As much as they might aspire to go back to a medieval world, WhatsApp comes in handy.”

“Undamming Rivers,” a retrospective of food and environmental crisis-focused artist duo Cooking Sections, opens in Stockholm. The exhibition presents three iterations of the artists’ ongoing research on the impact of fisheries (image: Salmon: A Red Herring, 2020), as well as a new project exploring the removal of hydro dams. The curators note that both topics are poignant in Sweden, where widespread “salmon-breeding programs were established to compensate for habitat loss and migration obstacles.” 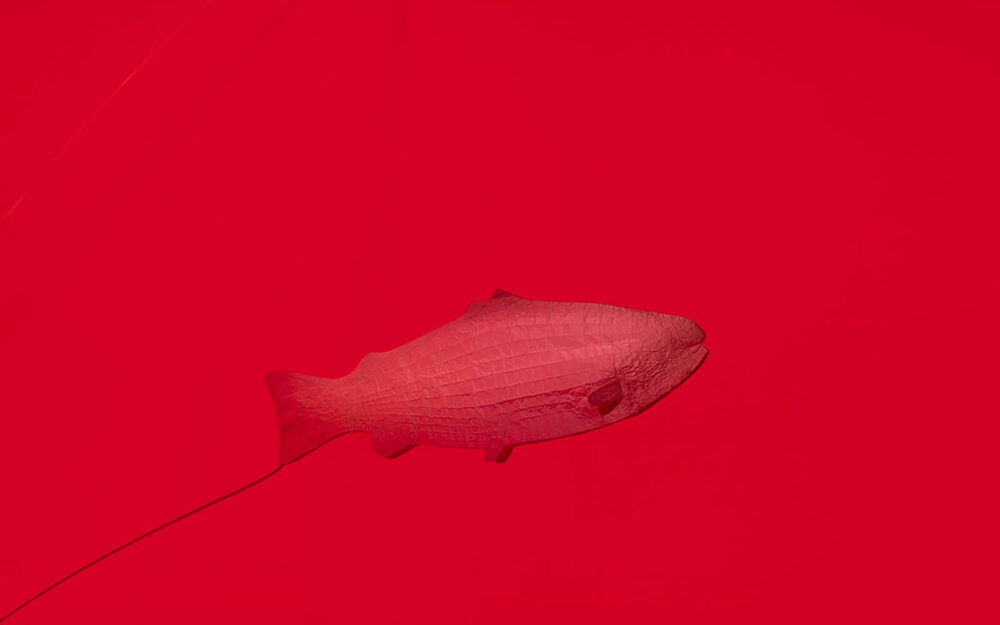 “What fascinated Molnar about computers was more practical than speculative or futuristic. It was their capacity to compute, and to do so accurately, quickly.” 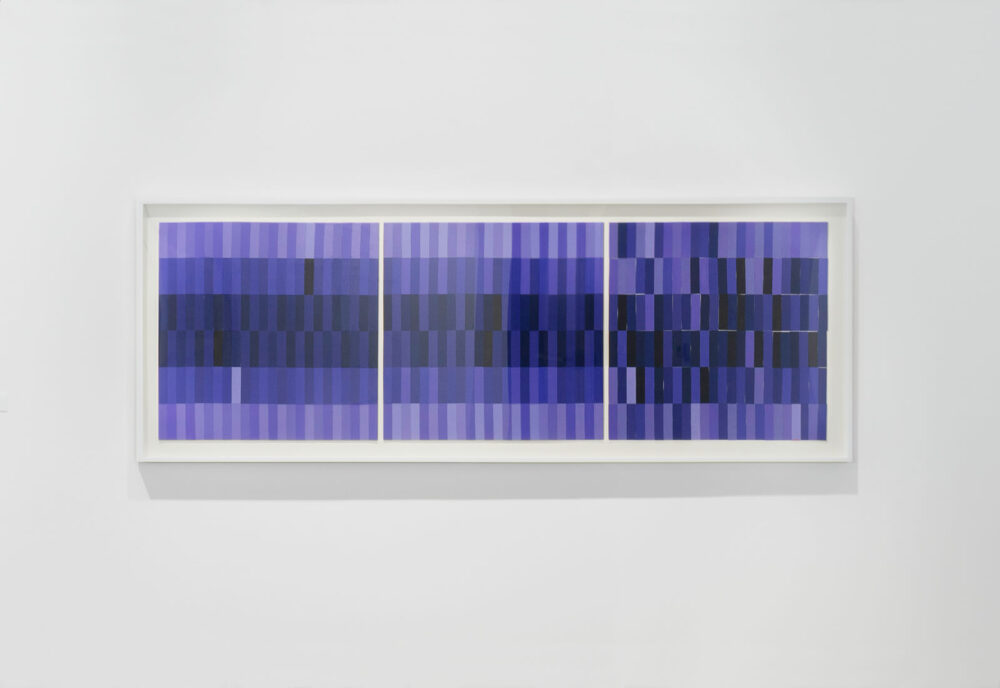 Before she had access to an electronic computer, Molnar worked with what she called the machine imaginaire, an imaginary computer or “a computer without a computer.”1 Molnar already knew what computers were, and what they could do, from books and magazines. While popular literature on computers focused on the looming question of artificial intelligence, the ‘electronic brain’ that might one day replace the human (a concern more rooted in science fiction than reality), what fascinated Molnar about computers was more practical than speculative or futuristic. It was their capacity to compute, and to do so accurately, quickly, and on a scale infinitely larger than a human could do alone. Perhaps what she found most appealing was how the computer crunched numbers and made decisions without the interference of what Molnar called “cultural ready-mades”—bias that might influence a human’s decision-making process. The idea was this: while an artist might make decisions according to principles of “good form” or “good composition” they learned in art school, the computer started with a clean slate, and could therefore make ‘objective’ decisions.

In the early 1960s, as the electronic computer remained expensive and out of reach, Molnar emulated its objectivity by hand-writing simple ‘programs’ to generate series of pictures. The machine imaginaire algorithms used basic combinatorial mathematics, the area of math concerned with problems of selection, arrangement, and operation within a finite or discrete system. Like a scientist conducting an experiment, she would alter only one variable or parameter in each iteration or variation, such as the choice of color or the angle of inclination of line segments. To make these changes, she often employed a rudimentary random-number generator: a roll of dice or the flip of a coin. 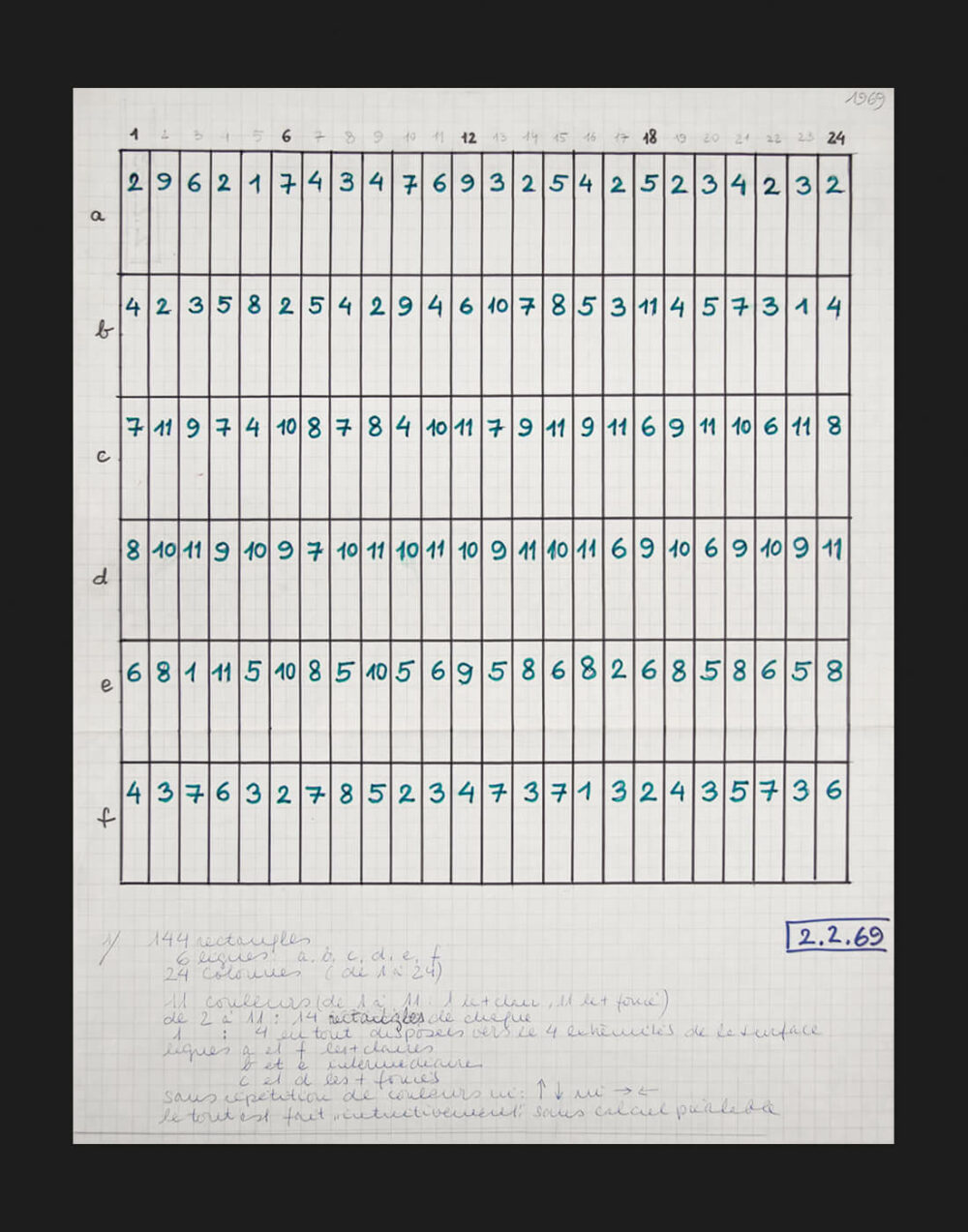 Vera Molnar, Untitled (Study for 144 Rectangles Triptych), 1969, felt tip marker, ink, and collage on graph paper, 13.5 x 10.5 in. / Anne and Michael Spalter Digital Art Collection
“Like a scientist conducting an experiment, she would alter only one variable or parameter in each iteration or variation.”
144 Rectangles,
1969 study
(mouse over)

Molnar argues that her shift from machine imaginaire to machine réelle, in 1968, was not a radical break but rather a continuation of the same method with different tools. The digital computer, she wrote in Leonardo, was able to “facilitate the execution of this time-consuming procedure.”2 Using the computer was, put simply, more accurate and more efficient than executing programs by hand.

While 1968 is framed as such a pivotal moment in Molnar’s career, there are very few extant works from this period that bear visible traces of the computer. Skeptics might even say that her role as a pioneer of computer graphics has been exaggerated. Perhaps the reason Molnar’s earliest experiments are fuzzy to history is because we’re not looking for the right kind of evidence.

Let’s return to Molnar’s first encounter with the computer that I discussed in the context of her friendship with the composer Pierre Barbaud. On Barbaud’s invitation, Molnar visited the mainframe computer at Bull–General Electric in Paris. She went in wanting to experiment with random color distribution, but quickly found that they only had the hardware for monochrome graphics. So Molnar developed a program that generated a list of numbers (referred to as a listing in French), each corresponding to a color. Then, like a game of Paint By Numbers, she colored a grid of squares by hand according to these results. The image is not a plotter drawing; in its process, it is closer to the work of Jean-Claude Marquette, working across town in the other Groupe de l’art et informatique, who also used a listing to fill quadrille paper, which he then transposed to paint on canvas. Molnar, however, quickly tired of this method, and wouldn’t do it again. That was when she sought out the computer lab at Orsay, the Centre de calcul interrégional de calcul électronique (CIRCE), which had two different kinds of plotters; here, she could not only design pictures with computers but actually execute them computationally as well.3 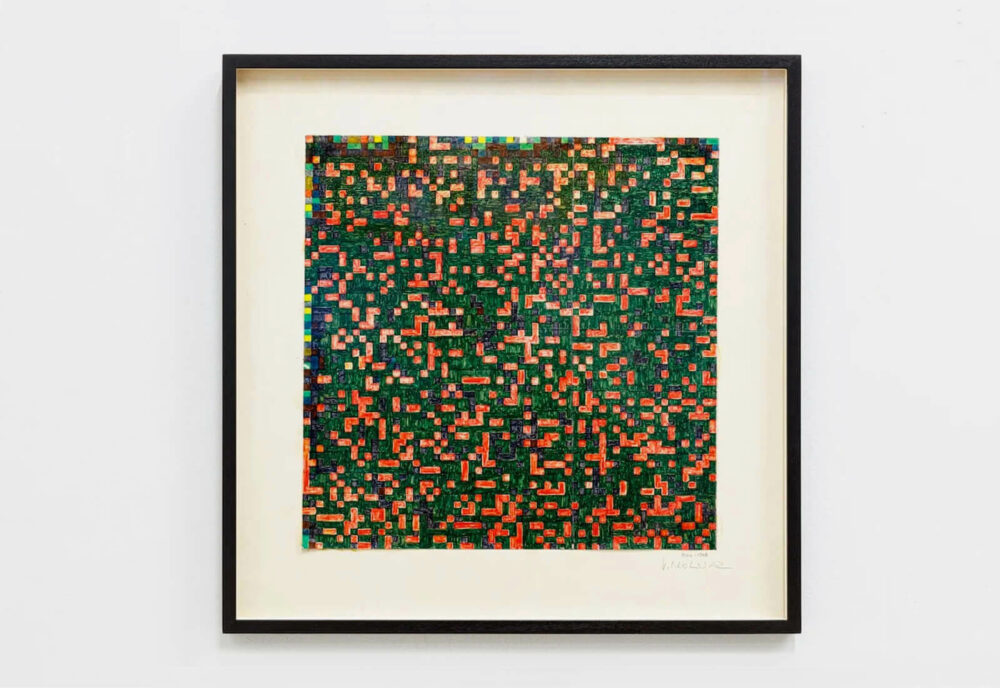 Molnar reminds us, however, that just because she started using a computer in the late 1960s doesn’t mean that she never made anything by hand again. It’s always been a back-and-forth for her—an idea that she crystalized in her recent artist’s book Main/Machine (Hand/Machine). David Familian, curator of the “Variations” exhibition, recently asked me about a triptych of collages in the show that Molnar made in 1969, 144 Rectangles. Did I know whether she used a computer here, or just a flip of a coin, to determine the placement of each purple rectangle? I shared Molnar’s anecdote about the listing—that some of her works, especially from this early period of computation, utilized the computer but were ultimately still handmade. It was a sort of “extension of the machine imaginaire,” David observed, “but instead of using a coin, she was using a computer.”

In other words, it would be reductive to divide Molnar’s work into pre- and post-computer art, with 1968 serving as a major turning point. The digital computer entered Molnar’s practice not with a bang, but gradually. We might even say that each step forward was followed by two steps back, until she figured out how the machine would best serve her interests. While Molnar has never presented herself as a ‘generative’ artist—this label is relatively recent, though not one she has explicitly rejected—the term feels especially appropriate here, for it acknowledges that an artist can work with systems and algorithms without necessarily using a particular technological tool. To focus on the generative is to focus on the artist’s process, which is what matters the most anyway.

“It would be reductive to divide Molnar’s work into pre- and post-computer art, with 1968 serving as a major turning point. The digital computer entered Molnar’s practice not with a bang, but gradually.”

“We believe AI is the future of corporate management. Our appointment of Ms Tang Yu represents our commitment to truly embrace the use of AI to transform the way we operate our business, and ultimately drive future growth.”

– Dr. Dejian Liu, chairman of the Chinese metaverse company NetDragon, announcing the world’s first (female) robot CEO. “Tang Yu is an AI-powered virtual humanoid,” reports Anugraha Sundaravelu, and “will be at the forefront of the company’s ‘organizational and efficiency department’.”
Metro
30/08/2022
DOSSIER:

“What fascinated Molnar about computers was more practical than speculative or futuristic. It was their capacity to compute, and to do so accurately, quickly.”

– Art historian Zsofi Valyi-Nagy, unpacking the vital 1960s period when generative art pioneer Vera Molnar embraced computation, first as an idea or approach to making fine art, and then (in 1968) with her first plotter drawings
Weaving Variations
● 30/08/2022
OUT NOW: 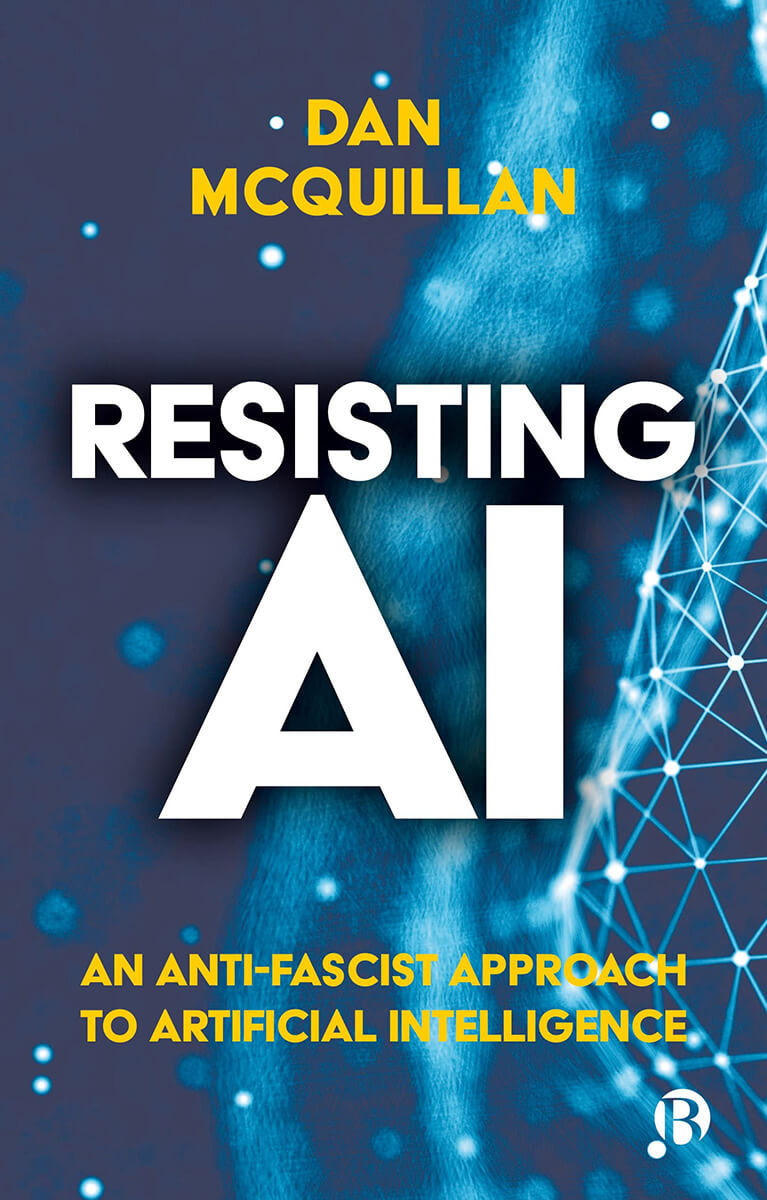 “They took the copper out of it. They actually cut it while it was charging somebody’s car.” 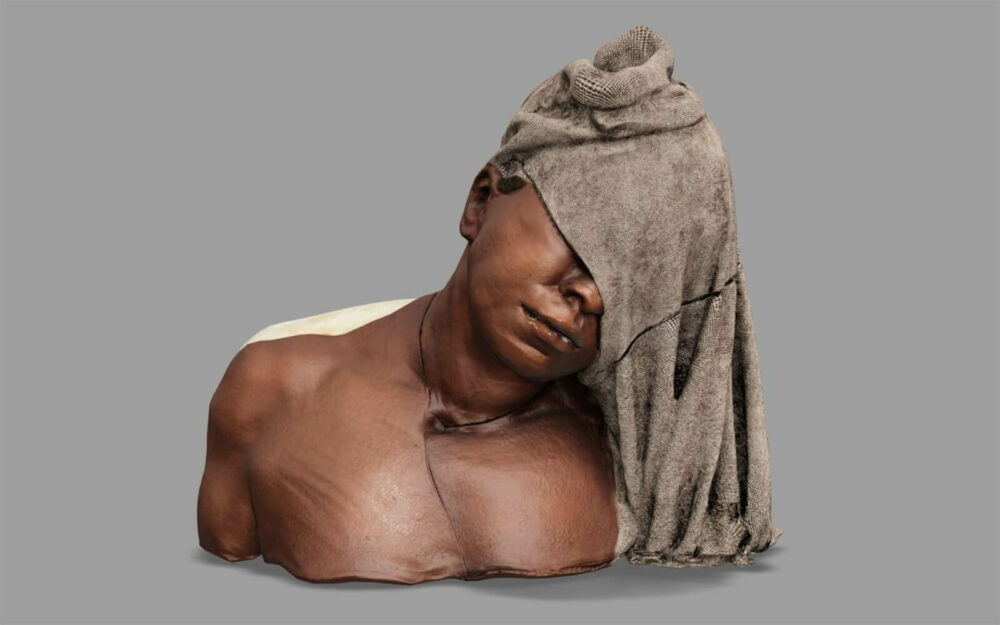 “Lab rats have rights … The same is true of scientists working with mice, monkeys, fish, or finches. These protected animals share one thing in common: a backbone.”

For almost a decade I’ve taught a class where we recreate artworks from the past in order to have a better understanding of the roots of computational art—each week we focus on a different practioner. Without fail I begin each semester with Vera Molnar’s work, because it offers us a chance to explore randomness and order but also, it’s a great class opener because her work is warm and ultimately about a kind of conversation with machines. Usually beginners get excited when they see the random() function; they create glitchy, frenetic and madening compositions where everything on screen rearranges itself every frame. But Vera’s work invites slowness and contemplation—it invites us to converse with randomness, to nudge a vertex over here, to delete a line over there, to push and pull at geometry until we agree or not, and begin again.

Zach Lieberman is a Brooklyn-based artist, researcher and educator. His projects have won the Golden Nica from Ars Electronica, Interactive Design of the Year from Design Museum London as well as listed in Time magazine’s Best Inventions of the Year. He creates artwork through writing software and is a co-creator of openFrameworks, an open-source C++ toolkit for creative coding and helped co-found the School for Poetic Computation, a school examining the lyrical possibilities of code. 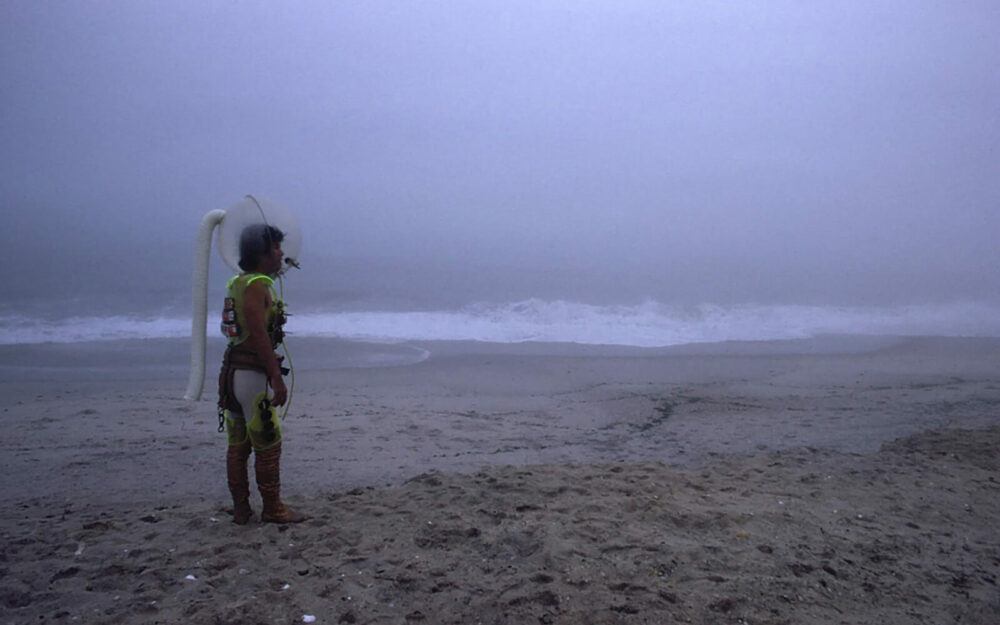 “Vera’s work invites slowness and contemplation—it invites us to converse with randomness, to nudge a vertex over here, to delete a line over there, to push and pull at geometry until we agree or not, and begin again.”

– Artist, educator, and Weaving Variations guest voice Zach Lieberman, on how generative art pioneer Vera Molnar’s oeuvre is humane “and ultimately about a kind of conversation with machines.”
Weaving Variations