001 – Note: New Trajectories (10/11/2020)
“The magazine had become a research vessel that encouraged cross-disciplinary experimentation and collaboration. Thus far, we filled two hefty compendiums that each mark a point in time.”
Animation:

Labyrinthine TXT “3” featuring words from Harold Cohen’s paper “What is an image?” (1975) is a generative type experiment by NaN.

Ten years ago, this very season, the first outlines of a yet to be named print magazine were being sketched—counter-intuitively so, as the first iPad had just been released and fast-paced digital publishing was all the rage. This new imprint would also be a misfit in other ways: neither art, design, science, nor a technology magazine, it was conceived as something in between—a magazine about disciplinary interstices and hybrid creative practices that are tricky to pin down. More interested in research, process, and entangled knowledge, it should not only explore but embody how niche developments influence other fields and, eventually, shape popular culture. Smart, methodical, and beautiful, the magazine should also have a lot of heart—and speak to many people.

Thousands of copies later, we’re still amazed at how HOLO resonated. It’s been described as “heavyweight in scope and literally” (Monocle), an “essential tool” (Jose Luis de Vincente) and an “extraordinary record” (Casey Reas), “that links discourse past, present, and future” (Nora O’Murchu). Over the years, HOLO visited the studios of interdisciplinary luminaries such as Ryoichi Kurokawa, Vera Molnar, Rafael Lozano-Hemmer, and Katie Paterson; it featured analysis by erudite thinkers including James Bridle, Georgina Voss, and Geoff Manaugh; and experimental designers like Moniker, Coralie Gourgeochon, and Karsten Schmidt added touches that push what you can do in print (e.g. why wouldn’t you visualize every glyph on every page on intricate character distribution maps, or use reader-generated input to ‘grow’ cover art?). In short: the magazine had become a research vessel, encouraging all aboard to explore new territory through experimentation and collaboration. Thus far, we filled two hefty compendiums that each mark a point in time. 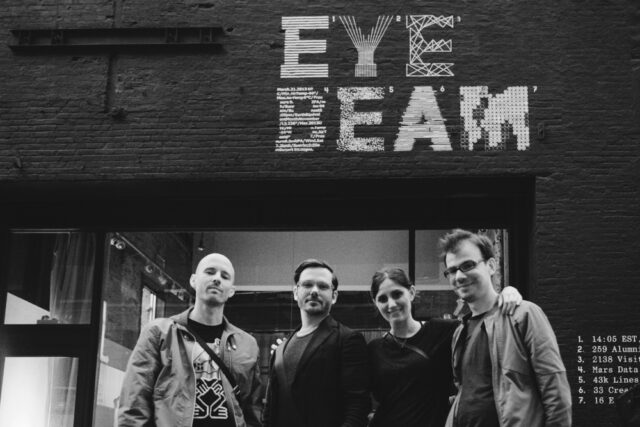 The Hat Creek Radio Observatory in Northern California, where the idea for the SETI Artist in Residence program was hatched; Georgina Voss wrote about it and other cross-disciplinary initiatives in HOLO 2

“The (New) Age of Discovery:” one of eight in-depth artist features published in HOLO 1 (soon to be reissued online for HOLO Readers)

Where’s James? For his HOLO 1 essay on the mediated gaze, artist and writer James Bridle took a series of ‘surveillance selfies’ across London
“Going forward, the lion’s share of the pages will be dedicated to the magazine’s research section—rigorous investigations that have always been at HOLO’s heart.”

HOLO 3 will follow in that same tradition. But it will also break new ground—it has to. Similar to how the first issue filled a void in the blog and publishing sphere, the next one will have to speak to current needs. HOLO 2.5—this website—is an important step in that direction (read more about our online publishing intentions here). It’s the online home we long felt HOLO needed, and a framework that will help us situate and evolve the printed magazine.

Going forward, HOLO will be published annually, synthesizing a year’s worth of observations into a timely theme. Hence, the lion’s share of pages will be dedicated to the magazine’s research section—rigorous investigations that have always been at HOLO’s heart. Other sections will become more dynamic and move faster as we reimagine them on this site: Stream, the magazine’s year-in-review fold-out timeline, has already become a living archive; Encounters, our signature series of long-form interviews, will follow soon. This diversification of our editorial activities—sustained focus on the one hand, agility and nimbleness on the other—will allow us to bring you more content more frequently. Most importantly, it will make HOLO a better magazine.

HOLO 3 will be published in the summer of 2021. Until then, we’ll use this space to share production notes, research snippets, B-roll material, and select stuff from the bin—after all, a lot of work has been done already and some of it in vain. We hope you’ll follow along as we venture into uncharted territory—to explore both disciplinary interstices and HOLO’s new printed form.

HOLO 3 will become available as part of a new Reader account model to be launched in early 2021. If you previously ordered HOLO 3 together with HOLO 2, you will receive your copy automatically. For details on the new model—and how to become a HOLO Reader—see The Annual and our note on HOLO blog.