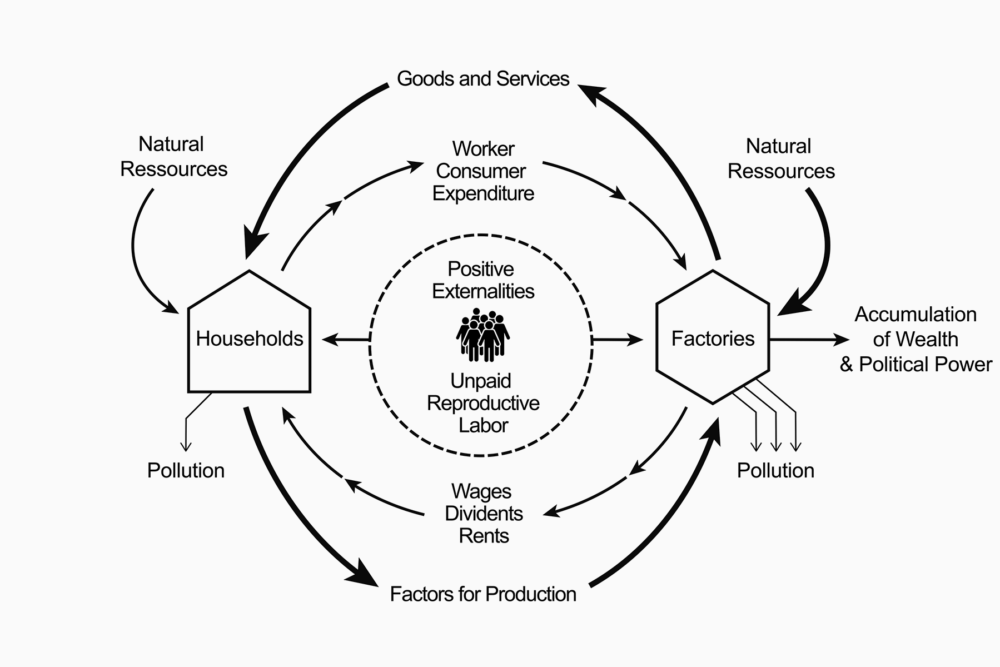 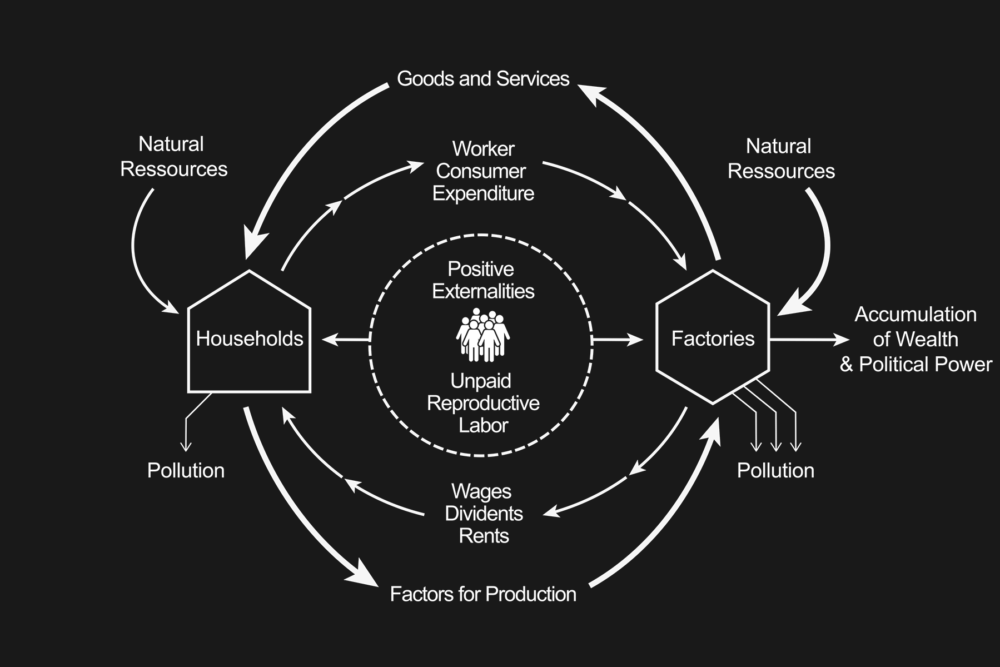 In April 2020, during the first wave of COVID-19, Amsterdam’s city government announced it would recover from the crisis, and avoid future ones, by embracing the theory of ‘doughnut economics.’ Introduced by University of Oxford economist Kate Raworth in a 2012 paper and popularized in her 2017 book Doughnut Economics: Seven Ways to Think Like a 21st-Century Economist, the economic model is a visual framework for sustainable development. Shaped like a doughnut—or lifebelt—it harmonizes planetary boundaries with human needs. The doughnut’s inner boundary represents the “social foundation,” where everyone’s necessities like food, healthcare, and education are being met. The outer circle describes “environmental ceilings”—air pollution, ocean acidification, climate change—that must not be overshot. The “sweet spot” in the middle is what Raworth defines as a safe and just space where humanity can thrive.

Apolitical and growth-agnostic, Raworth’s framework doesn’t lay out specific policies or goals. Instead, it relies on stakeholders—countries, cities, communities—to decide on doughnut benchmarks and ways of meeting them. Amsterdam, for example, committed to a five-year circular economy strategy that includes measures such as building supportive infrastructure with sharing platforms, thrift shops, online marketplaces, and repair services. The goal is to halve the use of new raw materials by 2030 and to achieve a fully circular economy by 2050. “In a doughnut world, the economy would sometimes be growing and sometimes shrinking,” Raworth explains in a TIME article, as GDP is put in service of reaching social goals within ecological limits, and not viewed as an indicator of success in itself. “When we think in terms of health, and we think of something that tries to grow endlessly within our bodies, we recognize that immediately: that would be cancer.”

“When we think in terms of health, and we think of something that tries to grow endlessly within our bodies, we recognize that immediately: that would be cancer.”

For “Post Growth,” DISNOVATION.ORG and Baruch Gottlieb interpreted Raworth’s theory with two models of their own: one shows how unaccounted externalities like unpaid labour, natural resources, and pollution fit into the standard macroeconomic model (top), and the other how economic activity is embedded within and dependent upon planetary energy flows (bottom). 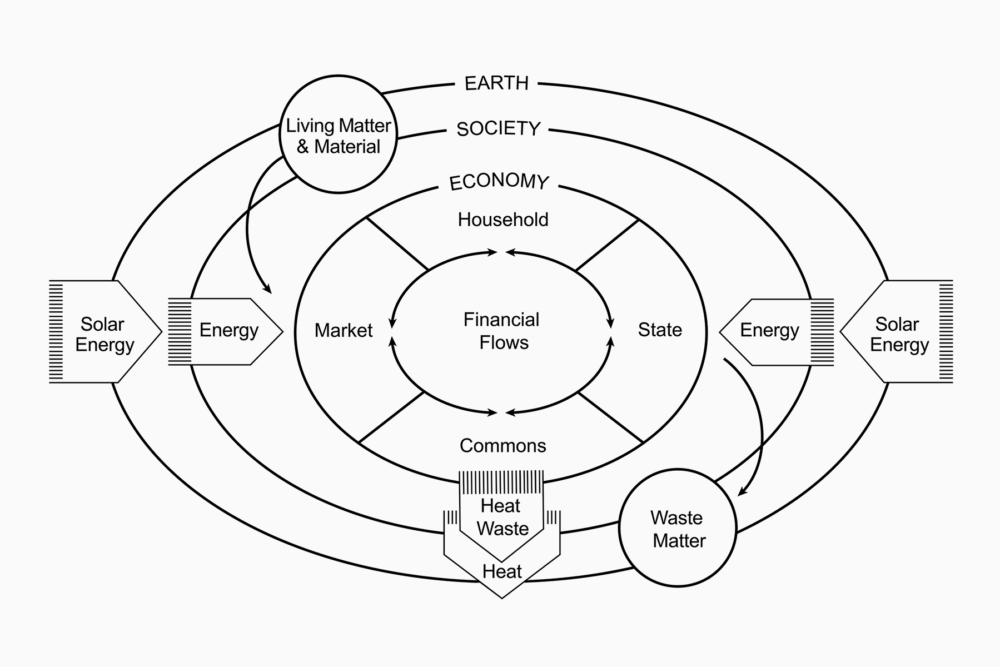 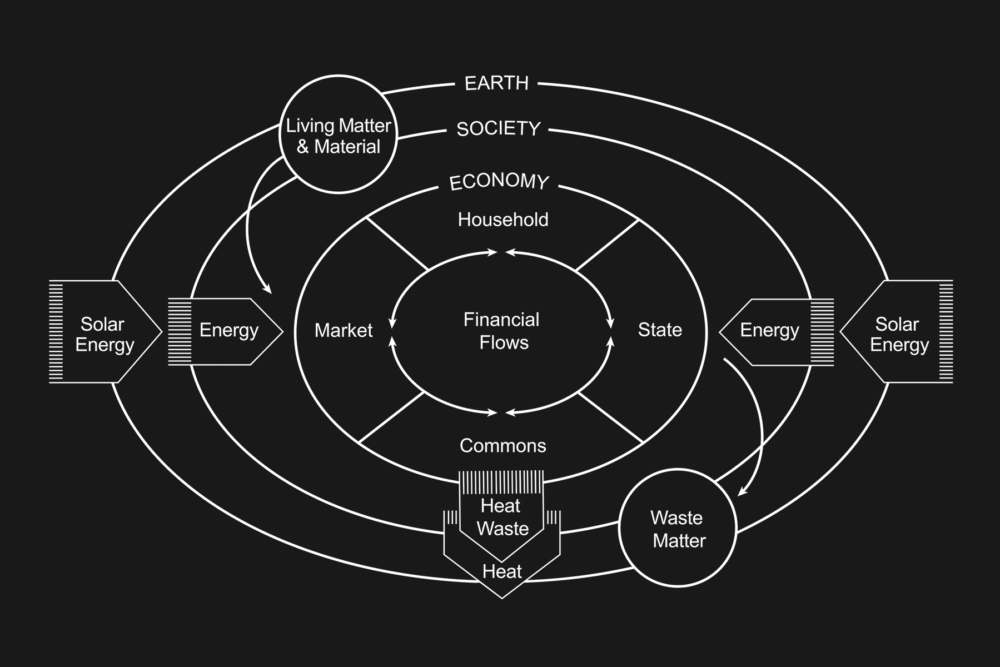