Curated by sci-fi author and OG cyberpunk Bruce Sterling, Turin-based Share Festival launches “Born to Be Online,” a ‘best of’ Share Prize-winning projects exhibited over the years. Among Sterling’s twelve picks are Paolo Cirio & UBERMORGEN’s Amazon Noir (2006, image), Lia’s Proximity of Needs (2008), Lauren Lee McCarthy’s Follower (2016) and Milad Tangshir’s VR Free (2019), all exploring different aspects of the Internet age. “With this summary of fifteen years of our involvement in net.art, we at Share Festival are bracing ourselves for what comes next.”

Born to Be Online

A physical articulation of invisible data flows, Mario Santamaría’s Unfixed Infrastructures and Rabbit Holes (2020) opens at Aksioma, Ljubljana. The Spanish media artist programmed a “rabbit hole” network to cycle signals through different geolocations, seeking the maximum possible route allowed by network protocols. The delay—a measure of the materiality of digital time—is visualised by two screens video-streaming a Foucault pendulum, one connected to the gallery WiFi, the other to the “rabbit hole” network. 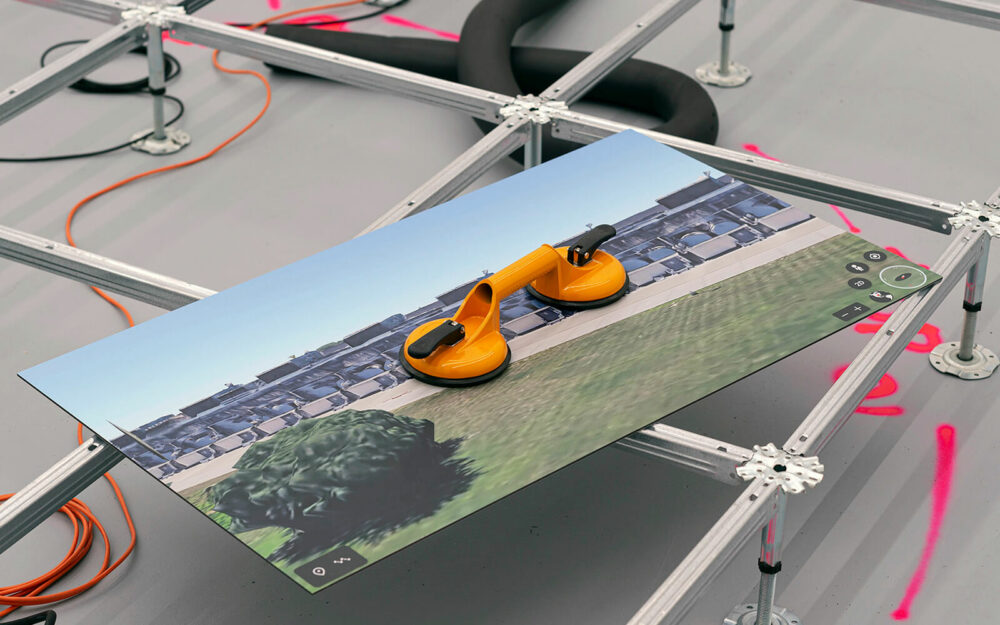 “We already live in a society which is very heavily gendered and very visually gendered. What these technologies are doing is making those decisions a lot more efficient, a lot more automatic, and a lot more difficult to challenge.”

– Data ethics researcher Os Keyes, on algorithmic detection of gender and sexual orientation in the wake of a new campaign to ban these applications in the EU
The Verge
● 14/04/2021

“Unmanned aircraft were seen as popular because U.S. soldiers didn’t have to go to the battlefield. But what about the casualties in the countries that were attacked by our drones?“ American artist Sam Durant asks in a wide-ranging interview about his new public artwork Untitled (drone). “The idea was to bring this conversation home to America.” Originally conceived in 2016, Durant’s life-sized fiberglass sculpture of a Predator drone will be installed atop a 25-foot-tall pole on New York’s High Line in May. 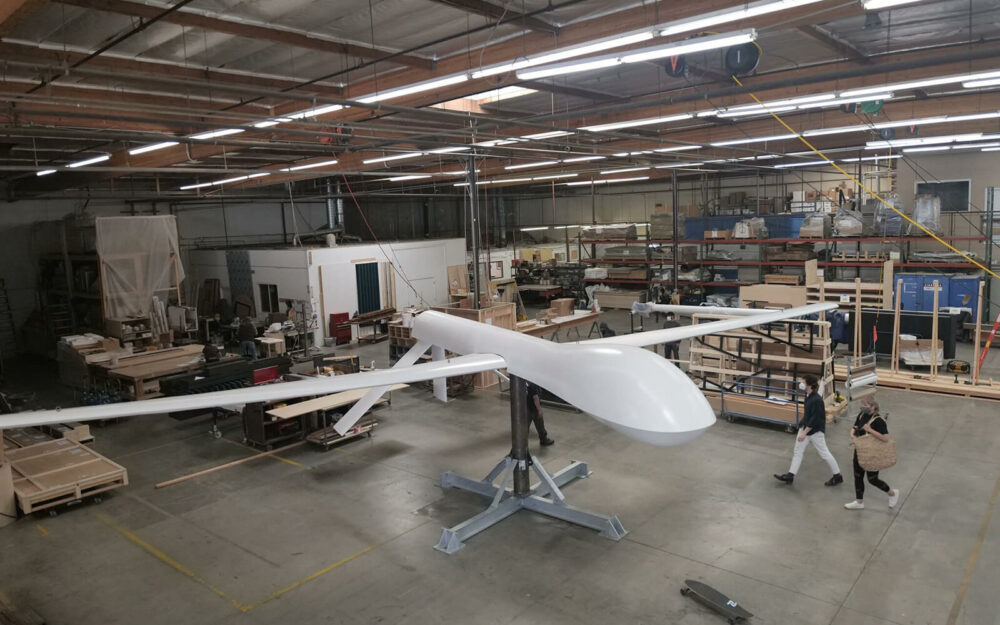 “That’s never felt good to me, having to live in San Francisco and see the physical manifestation of capitalism’s inequality engine in geographical form. And today, with the pandemic and the economic crisis, the number of tents has exploded around here.”

– Abolish Silicon Valley author Wendy Liu, on living in Big Tech’s ‘belly of the beast’ and routinely being confronted by the jarring mix of obscene wealth and extreme poverty
Input
● 09/04/2021
OUT NOW:

Go With the Flow

An examination of ‘motion’ in digital design from animated GIFs to kinetic type, feat. Lev Manovich, Olia Lialina, Zach Lieberman, and others
Back Office 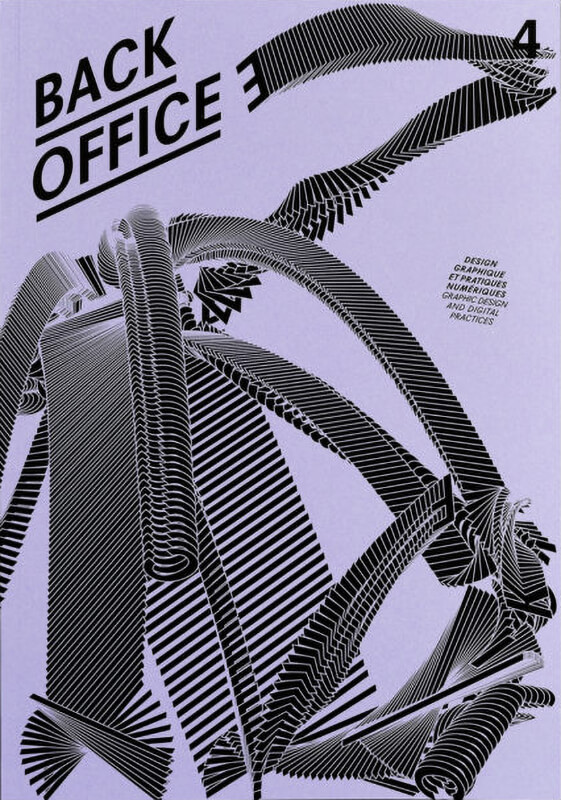 “Using steganography, I have hidden the whole essay inside the JPEG. Yes, you’re looking at a conceptual artwork that is currently explaining itself to you.”

– Matthew Plummer-Fernandez, demonstrating how artists are broadening what NFTs could be on the burgeoning artist-led marketplace Hic Et Nunc. “NFTs may liberate artists not only technically, but conceptually,” he writes. ”As the certificate becomes widely accepted as the transferable commodity, the associated artwork is free to be an idea, an essay, or a gift.”
plummerfernandez.com
● 09/04/2021

Artists Ben Rubin and Brian House’s “Terminal Moraine” opens at Brooklyn Botanical Gardens. Taking a meta-historical approach, its lone eponymous work models the local impact of the Laurentide ice sheet. Approximately 18,000 years ago, the 600 metre wall of ice flowed down the Hudson Valley and shaped the landscape—Rubin and House simulate the glacial retreat and forest growth that followed. In their sonification “cells expand and branch while crystalline structures gradually break apart,” helping listeners contemplate the deep time of history. 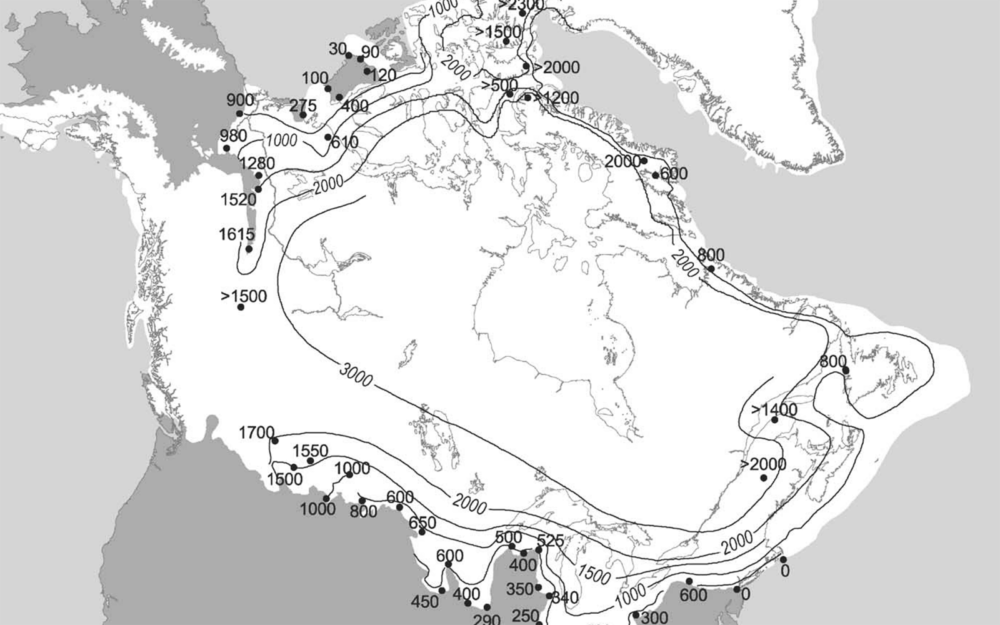 “This is a time not only to ask how to resurface differently, but to ask what foundations to urgently sink—to recognise that it’s not enough to abandon, but that we have a role to abolish normal devices.”

A collaboration between sound designer Yuri Suzuki and musical artist and composer Miyu Hosoi, Crowd Cloud is unveiled at Haneda Airport, Japan. The site-specific installation distils the vowels of the Japanese language, sung by Hosoi, creating a unique composition that emanates from a choir of dozens of standing horns that converse with each other like people. Crowd Cloud is part of the Paola Antonelli-curated “Culture Gate” exhibition that sees artists offer fresh interpretations of Japan’s diverse culture in airports across the country. 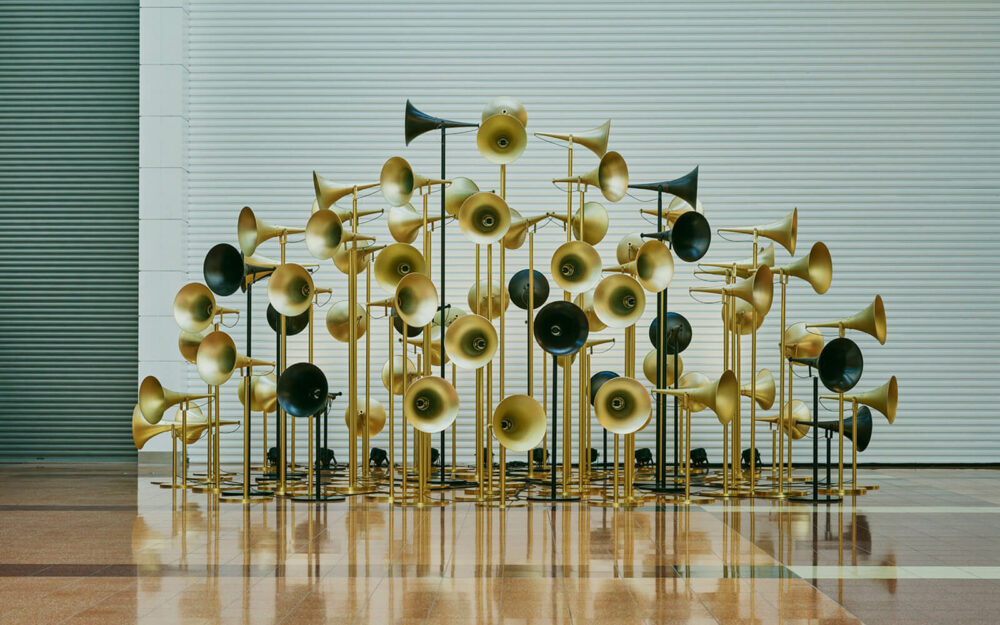 “Myths unfold in real-time alongside critical ‘reveals,’ unveilings, and clarifications. Cultural gaps between the humanities and the sciences expand even as artists and interdisciplinary practitioners work to collapse them.”

– Nora N. Khan, on the confusion arising around computation. With her at the helm, the HOLO Annual will “engage with the new responsibilities that critics, theorists, programmers, technologists, and artists have to make sense of the mess.”
This Isn’t Even My Final Form
● 07/04/2021

With “Take Me to Another World,” the first-ever Charlotte Johannesson retrospective opens at Museo Nacional Centro de Arte Reina Sofía, Madrid. Named after a computer graphic the Swedish artist created in the 1980s, the survey traces 60 years of Johannesson’s image-making between craft and technology. A textile artist who turned to computer programming (in 1978, the autodidact swapped her loom for an Apple II Plus), Johannesson’s political tapestries are inwoven with 1960s counterculture, punk, and feminism. 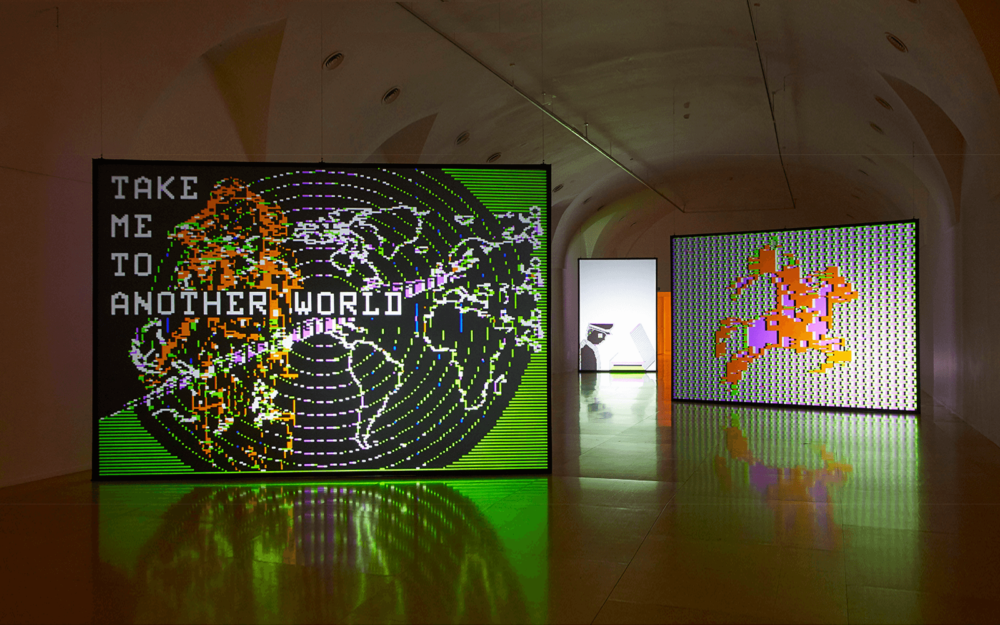 “I see artists erasing their own URLs from Twitter bios and replacing them with links to cryptoart platform pages, and turning their Twitter feeds into very noisy adverts for platforms, talking about bids, drops, sales.”

– Ben Grosser, on why he created Tokenize This, an NFT-critical artwork that—of course—can not be tokenized: the website containing a uniquely generated digital object can only be viewed once. “It’s resistant to being commodified,” states Grosser. “It says, ‘I don’t want to participate.’”
Vice
● 07/04/2021

A reimagination of Hieronymus Bosch’s iconic triptych for the digital age, Carla Gannis’ The Garden of Emoji Delights opens at Stockholm’s Fotografiska. In her 2014 collage, the American artist explores how Bosch’s visual world from 500 years ago matches our emoji dictionary, circa now. “There is humour, darkness, and absurdity,” state the curators. “Earthly, cosmological, and technological conditions are combined,” revealing ideologies and social constructs that have remained unchanged for centuries. 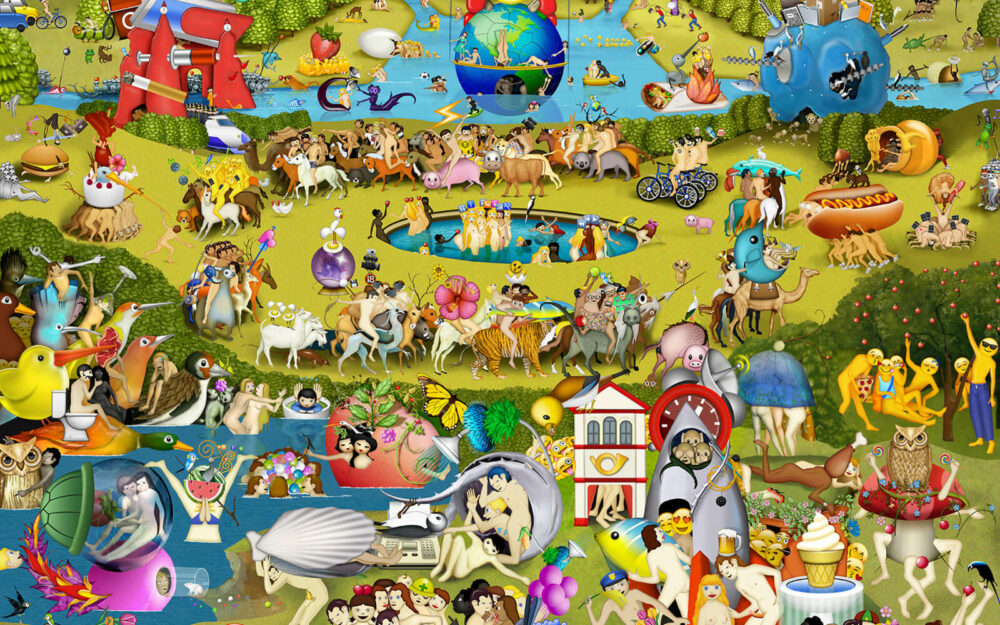 “Stan VanDerBeek coined the phrase ‘expanded cinema.’ But it was Gene Youngblood who put it on the cover of a book, filled it with rocket fuel, and sent it buzzing through the late-1960s art world like a heat-seeking missile.”

– Caroline A. Jones, in a 2020 Artform piece on the fiftieth-anniversary edition of Youngblood’s Expanded Cinema (1970), now cited in the media theorist’s obituary
Artforum