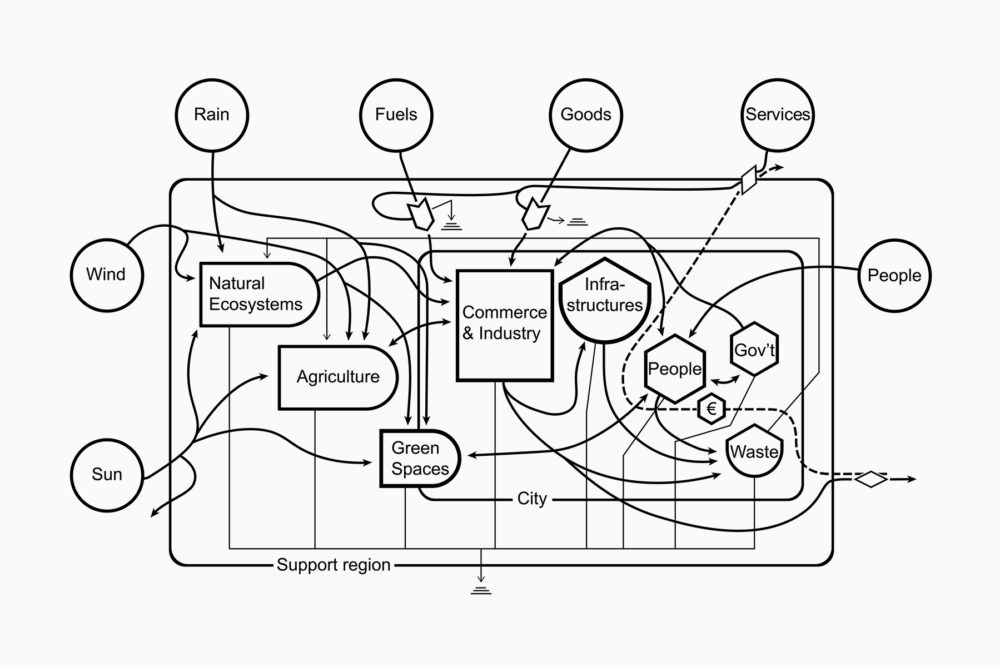 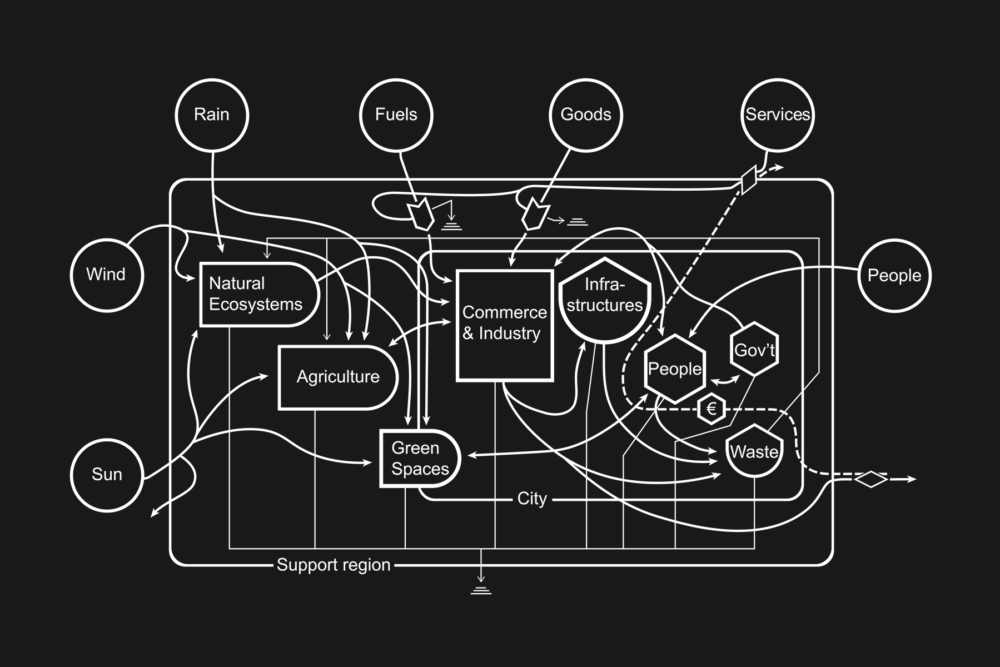 “There is a discrepancy between the approach of economists to environmental protection and the approach of nearly everybody else,” wrote the Nobel Prize-winning American economist Thomas C. Schelling in his 1983 book Incentives for Environmental Protection. It lays out how pricing incentives such as charges on emissions; in contrast to regulatory standards, can be shaped into a practical policy that is technically effective, politically enactable, administratively enforceable, and equitable. To this day, the environmental impacts of industrial activity remain unaccounted for as what economists call externalities. The inputs provided by the planet’s ecosystems are similarly ignored. American ecologist Howard T. Odum’s Emergy accounting method provides a radical alternative. Developed in the 1990s, and informed by his work on general systems theory, Emergy describes an eco-economical model based on Embodied energy, wherein the totality of the energy required to produce goods and services—the sunlight that makes plants grow, the cosmic forces that forged Earth’s precious metals—is considered. It posits that natural systems and anything in them retain “energy memory” that, technically, goes all the way back to the Big Bang. “Emergy is a measure of energy used in the past and thus is different from a measure of energy now,” Hodum writes. “The unit of emergy (past available energy use) is the emjoule, as distinguished from joules used for available energy remaining now.”

“Emergy describes an eco-economical model based on Embodied energy, wherein the totality of the energy required to produce goods and services—the sunlight that makes plants grow, the cosmic forces that forged Earth’s precious metals—is considered.”

For “Post Growth,” DISNOVATION.ORG and Baruch Gottlieb translated Odum’s model into two diagrams, one representing industrial activity (top) and the other agriculture (bottom). They demonstrate that we act as neither individuals nor independently, but rather enmeshed in extensive networks of embodied energy flows. What would an economic system look like if Odum’s “solar energy-equivalent unit” was applied throughout, as the artists have done here? Would it better account for our deep entanglement with the biosphere and the material affordances we rely on? 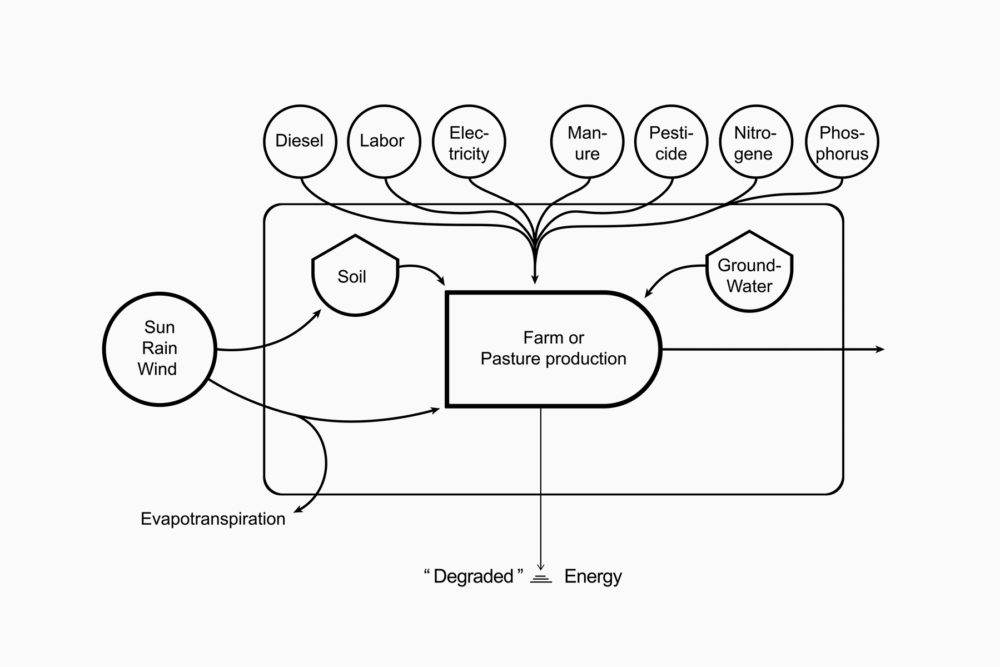 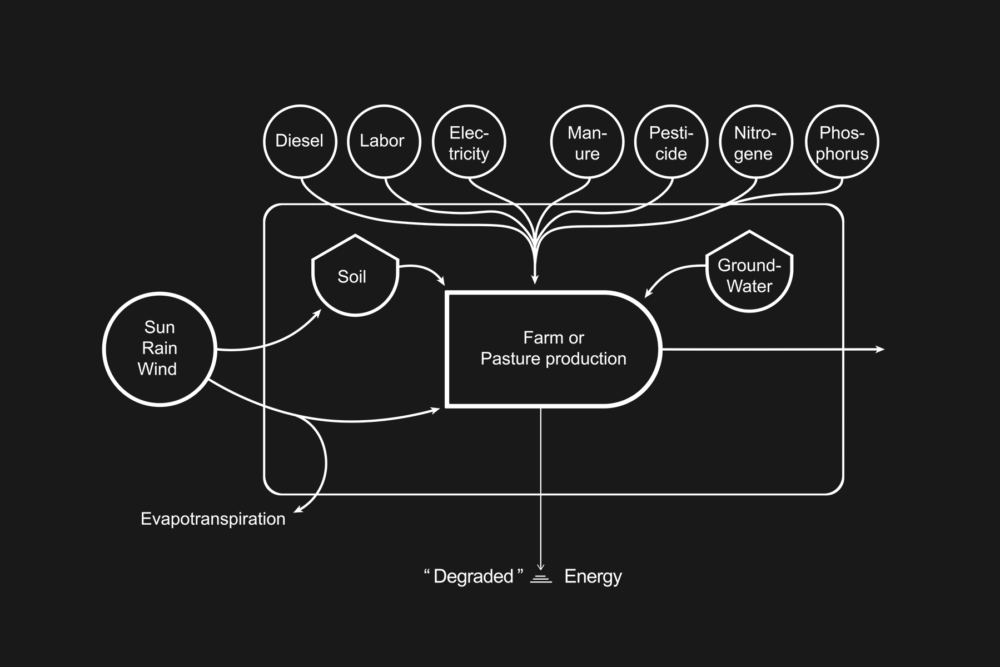