“Yet function is rarely an obvious impediment in wearable tech. Wristwatches only tell time, and sunglasses only tell the world you’re awesome. In some ways not doing too much was the point of Glass.”

– Opinion columnist Farhad Manjoo, reminiscing about the simplicity of Google Glass in a hyperbolic (but amusing) rumination on the looming age of VR, AR, and “face computing”
New York Times
● 15/09/2021

Curated by Karie Liao, “Geofenced” opens at (and around) Toronto’s InterAccess. Presented on the artist-run centre’s steps, at a local parkette, microbrewery, and other sites, the show features AR works by Cat Bluemke & Jonathan Carroll, Scott Benesiinaabandan, Jenn E Norton, and Adrienne Matheuszik. The latter’s Proxima-B (2021, image) superimposes scenes from an “extraplanetary resort … free from the troubles of the earth” in the InterAccess gallery, at a nearby parking pad, and on a billboard. 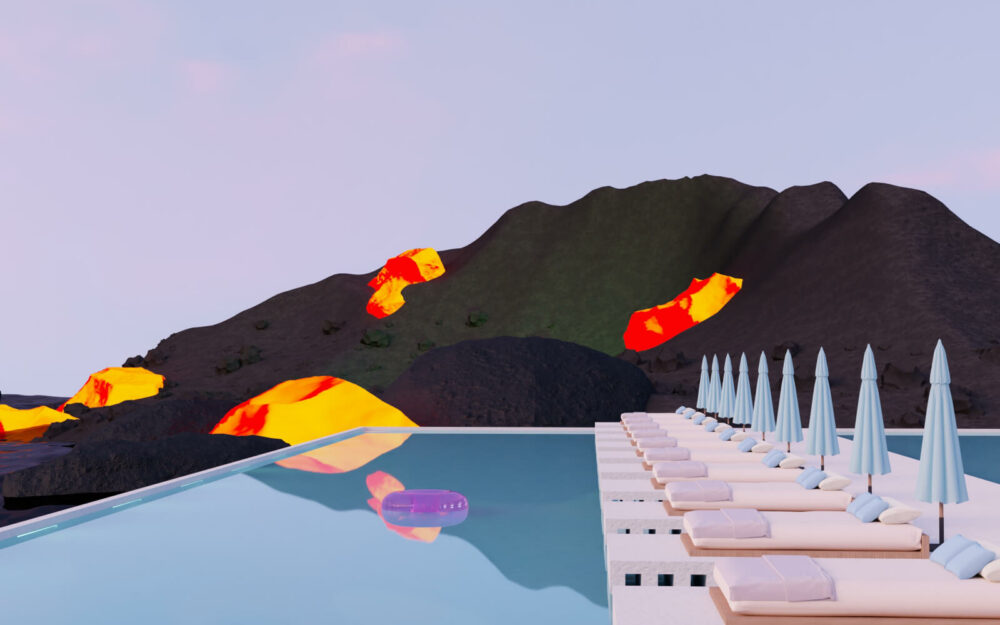 Twitter user and Blockchain sleuth Zuwu shares an incriminating paper trail revealing a senior employee of the NFT platform OpenSea has been engaging in insider trading. In a Twitter thread they list a number of suspicious transactions from wallets connected to OpenSea Head of Product Nate Chastain—indicating purchases of NFT projects right before they were featured on the site’s homepage, and then corresponding sales when the price spiked. While unscrupulous NFT collectors engage in a range of dubious practices including scalping, bribing miners, and gas wars, this is the first instances of a major NFT platform employee being caught red-handed.

Huidi Xiang’s “How to Be an Artist in Minecraft” opens at Ender Gallery. A sculptor who became obsessed with the routine (and implicit labour) of Animal Crossing during the pandemic, Xiang’s Ender residency culminates with the presentation of a spreadsheet of every act she performed in Minecraft over a three-month period. Building construction, skin customization, tutorial creation, every minute of her residency—and for those that can’t visit in-game, note the complete log on the artist’s website. 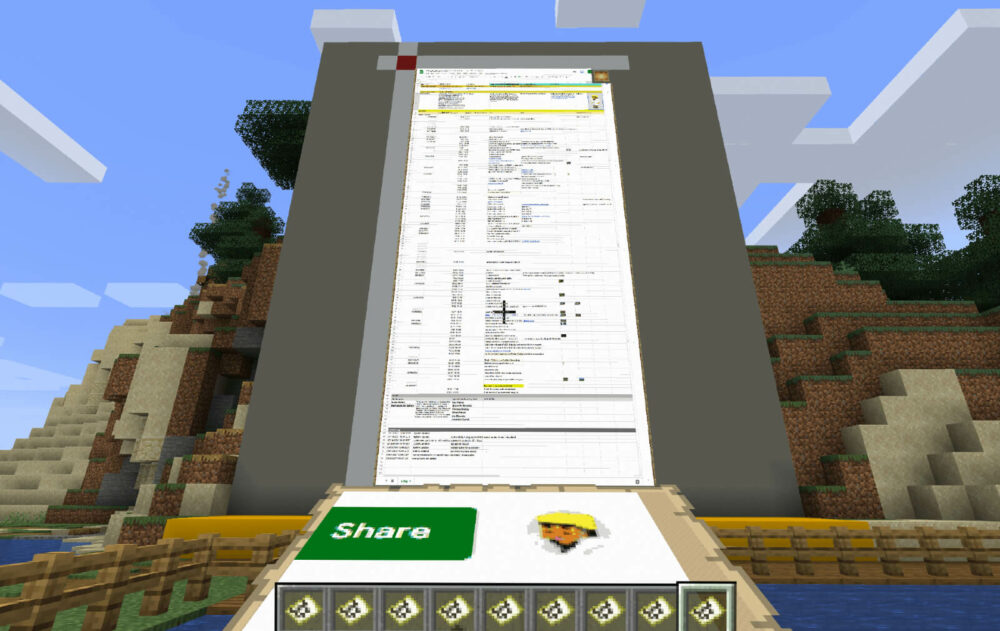 “Transcribing, translating, and free-associating live—there was no time to sit with our thoughts. We were forced to reflect as we went, in God mode, getting it all down for posterity. A syndrome I called documentia.” 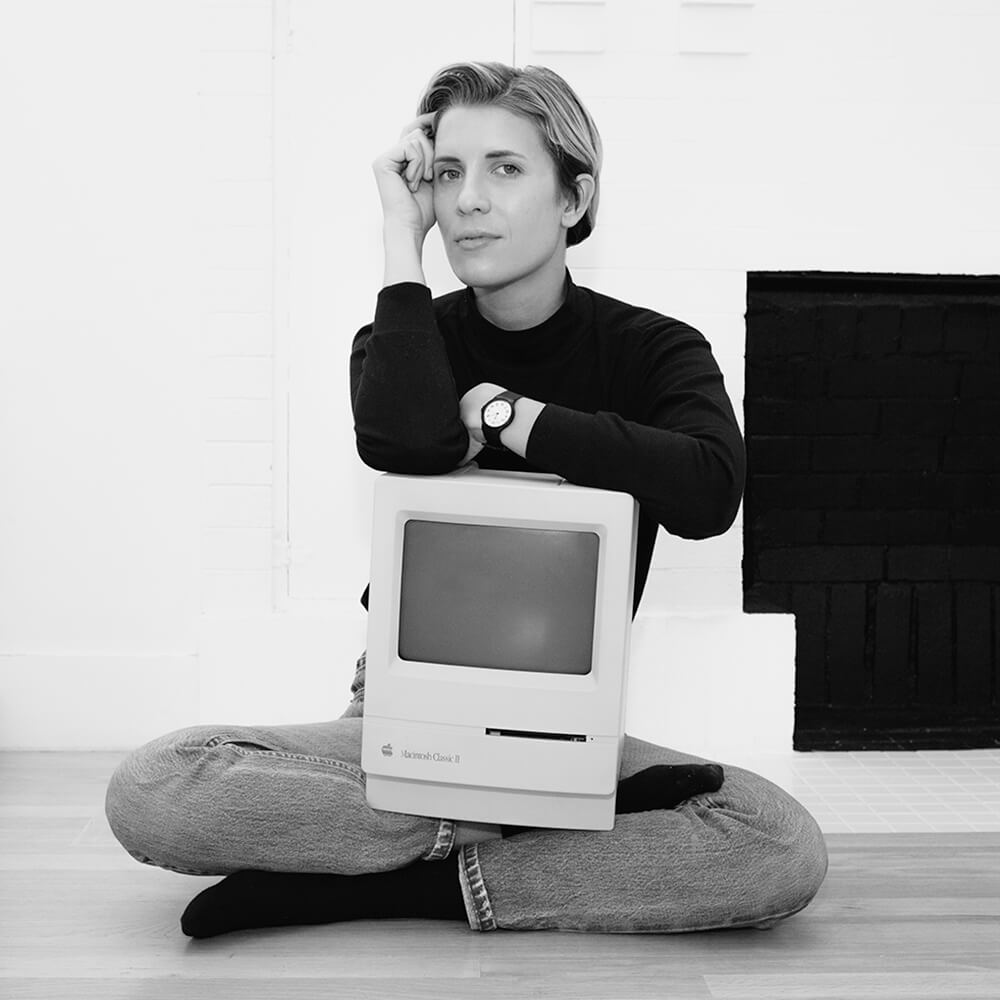 For two weeks we lived the MUTEK Forum, documenting talks, roundtables, and workshops in real time. I’ll spare you our big takeaways from the Forum itself—the palpable excitement about decentralization, the collective desire to reframe artificial intelligence as tool and collaborator, or the eternal tension between the humanities and the sciences—as these are all contained in our sprawling dossier, in the form of soundbites and learnings. Instead I want to focus on the act of recording itself.

The MUTEK Recorder was a real-time publishing experiment. We worked under the watchful eye of the clock: up first thing in the morning and right into the thick of it, transcribing, translating, and free-associating live, synthesizing disparate conversations in time for an afternoon broadcast. There was no time to sit with our thoughts; we were forced to reflect as we went, in God mode, getting it all down for posterity. For something that required total presence, it was oddly dissociative. We were in the moment, at a distance. Jokingly, I called our syndrome documentia.

In his opening keynote, Benjamin Bratton cited Derrida: “the archive is a promise to the future that the present time will make itself accountable,” he said. “It can also be a technology to ensure that the future is even possible in the first place.” I wonder if our work recording MUTEK is quite the same as an archive. By virtue of how quickly we worked, we could never claim to have produced something so complete. And our small group, each of us guided by of our own interests, interpreted the Forum’s conversations subjectively.

I couldn’t help but spin up anecdotes from my own research, for example, or pull references from my library shelves. The practice of recording in this way became self-reflexive. A panel about sound intensity in electronic music awoke my tinnitus, reminding me of the obliterating drone of a NASCAR race; a conversation about procedural game maps conjured the time, years ago, that a friend and I tried to swim across the ocean in Grand Theft Auto V.

“The practice of recording in this way became self-reflexive. A panel about sound intensity in electronic music awoke my tinnitus, a conversation about procedural game maps conjured the time that I tried to swim across the ocean in Grand Theft Auto V.”

Maybe what we produced was not an archive at all, but a memory palace. The Romans called it the “method of loci,” of places: to remember things, imagine them in the rooms of a house you know well, then wander its halls, recalling. Roman orators would prepare long speeches in the rooms of imagined houses; each orator had their own memory palace, an empty architecture that could be filled and filled again with new ideas. In the modern world, we have little need for such techniques, which emerged before writing. But the mechanism retains its archaic power.

The Romans enlisted their greatest technology, architecture, in the service of memory; perhaps our virtual architecture—a dossier, embedded on the World Wide Web—could do the same. I might wander these rooms in a year and remember the conversations that echoed within, which in turn may invite their own memories, their own interpretations. I might also find new tenants in their place: the foundations of the Web are never solid.

Of course, there are other, fine approaches. Our guests were generous enough to share a few: Mindy Seu builds archives, Xiaowei Wang uses recipes to record in the field, and Tim Maughan captures the present in science fiction stories. We all have our tools for thinking, each with their own shape. Perhaps by including all of these approaches, our Recorder was something more like a toolbox—a collection of strategies, suited to different applications, stress-tested and ready to work. Perhaps the mark of a successful project is how well it resists being defined by such neat metaphors.

“Maybe what we produced was not an archive at all, but a memory palace. I might wander these rooms in a year and recall the conversations that echoed within, which in turn may invite their own memories, their own interpretations.”
11/09/2021
DOSSIER:

“Transcribing, translating, and free-associating live—there was no time to sit with our thoughts. We were forced to reflect as we went, in God mode, getting it all down for posterity. A syndrome I called documentia.”

Marjolijn Dijkman’s solo exhibition “Electrify Everything” opens at NOME Gallery, Berlin, bringing together three interrelated bodies of work that ruminate on the history of electricity and the environmental impact of modern energy storage. The photo series Earthing Discharge (2019-21, image), for example, is made with a high voltage electro-photography technique in which the Dutch artist uses a discharge plate made from a tin-coated sheet, the same material as used in touch screen devices. 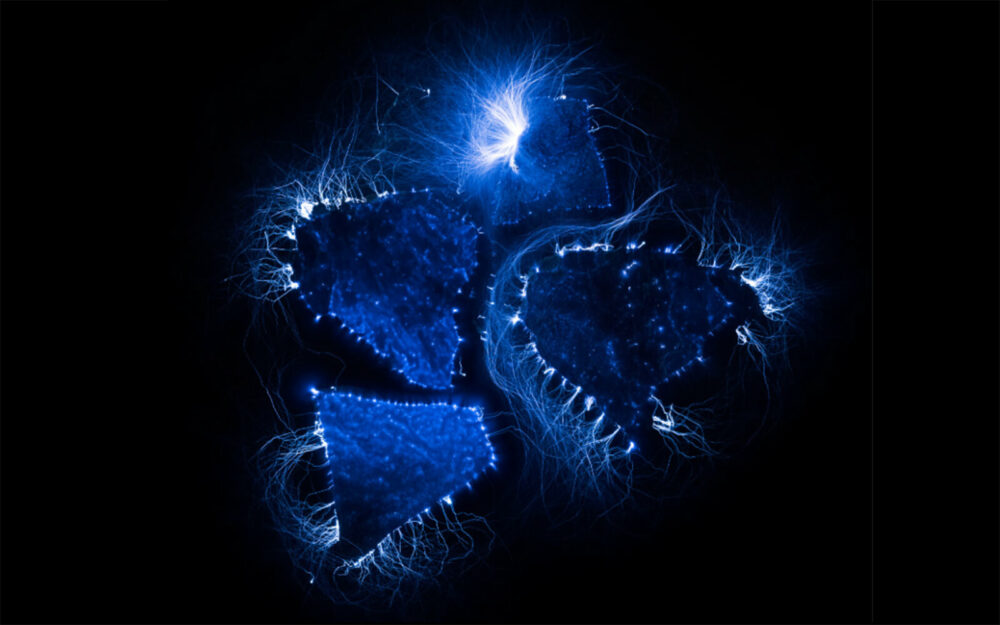 “My Future is not a Dream,” a show presenting Cao Fei’s early works opens at Espace Louis Vuitton München. Dealing with the virtualization of place, labour, and leisure, selections include RMB CITY: A Second Life City Planning (2007, image), which depicts the collision of Chinese urban life with immaterial space, and Imbalance 257 (1999), which presciently imagined youth “subjugated by entertainment … disguising themselves as manga or videogame characters to play out a fictional life.” 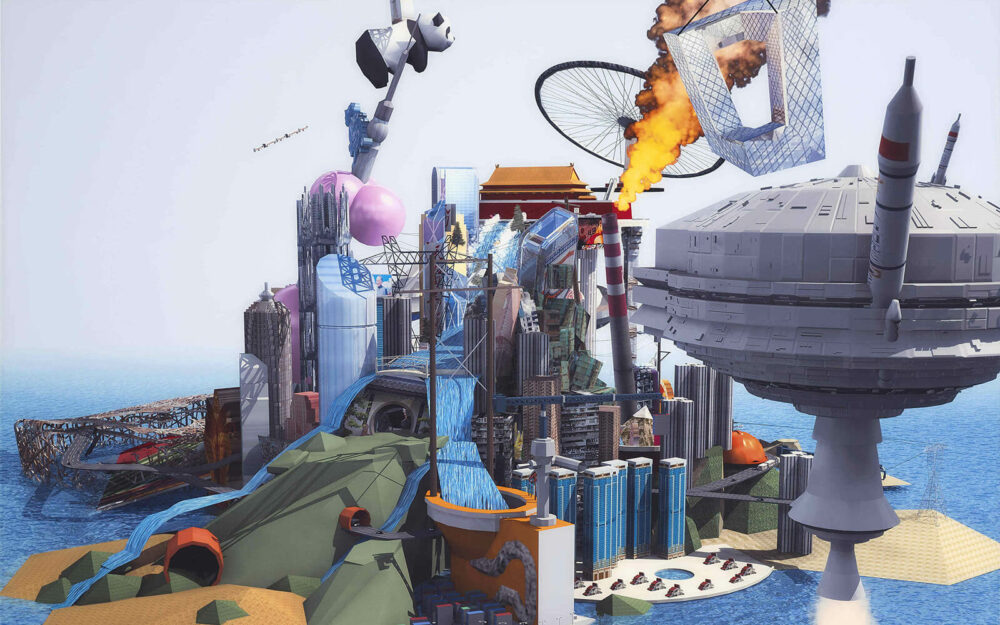 “Complex systems seek equilibrium. When they are pushed too far out of one equilibrium state, they can flip suddenly into another.”

– Writer and Guardian columnist George Monbiot, on the dangers of climate tipping points. “Just as one continental plate might push beneath another in sudden fits and starts, our atmospheric systems will absorb the stress for a while, then suddenly shift,” he writes. “Yet, everywhere, the programs designed to avert it are linear, smooth, and gradual.”
The Guardian
● 08/09/2021

MIT researchers announce a breakthrough in magnet technology that paves the way to green fusion power. “On Sep 5, a large high-temperature superconducting electromagnet was ramped up to a field strength of 20 tesla, the most powerful magnetic field ever created,” MIT News reports. The new magnet allows far better control of fusion plasma inside a much smaller reactor—a watershed moment for the technology. “None of us are trying to win trophies at this point,” notes MIT’s Maria Zuber. “We’re trying to keep the planet livable.” 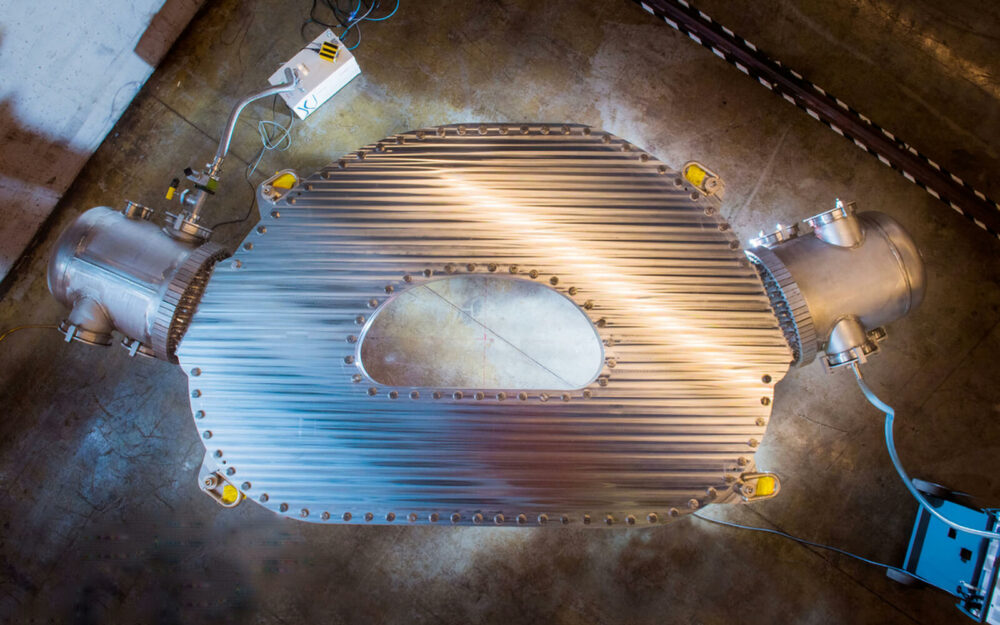