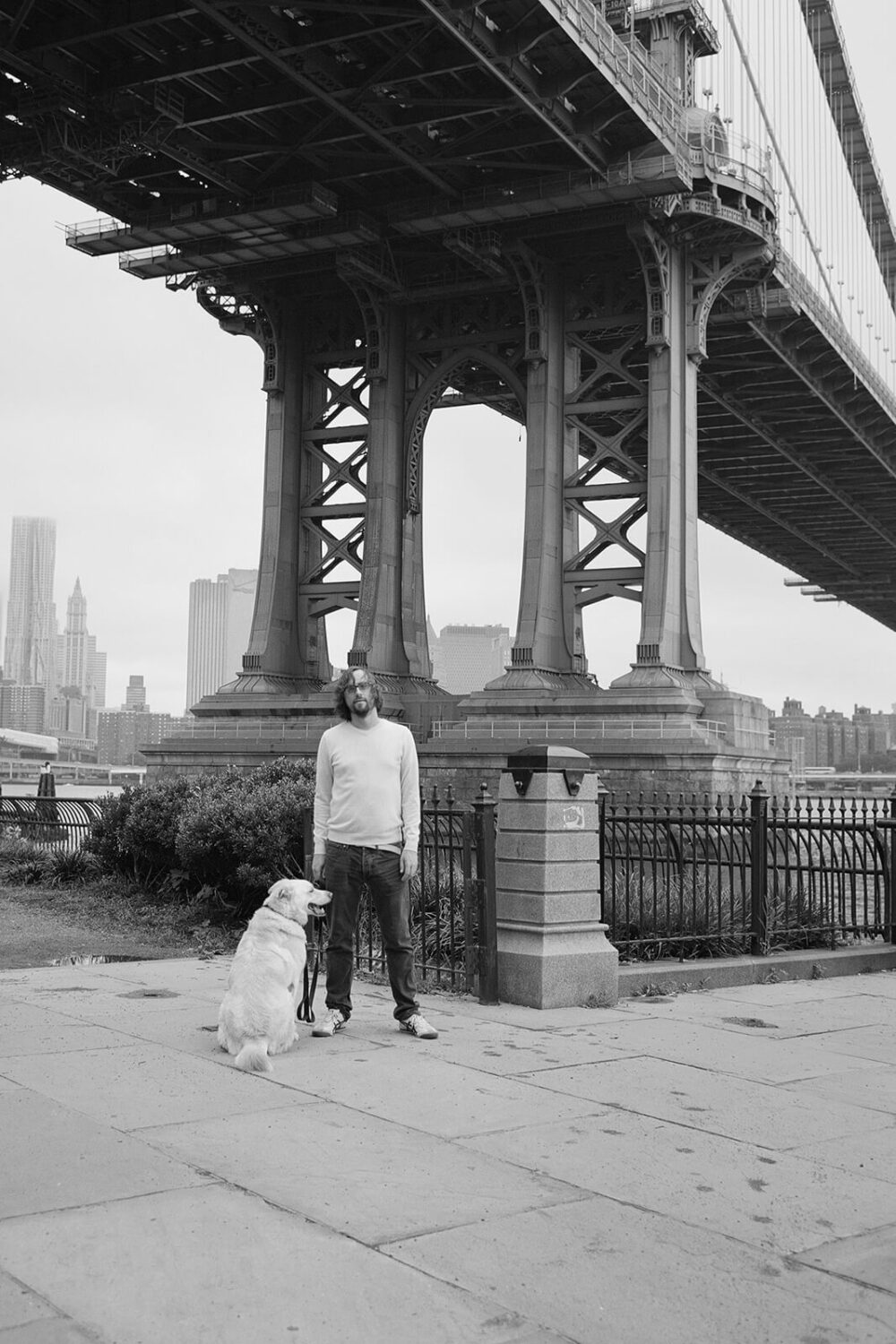 From computationally arranging the names of the deceased at the National September 11 Memorial to mapping the viral spread of links to New York Times articles on Twitter, Canadian software artist Jer Thorp has changed the way we think about data. Now a co-founder of the interdisciplinary ‘supergroup’ the Office for Creative Research, Thorp is posed to reinvent how we not only represent, but engage quantitative information.

It is the third week of December 2011 and within the brightly lit confines of a cramped studio, Natalie Be’er carefully handles her asymmetrical, custom-knit scarf while outlining the organizational logic driving her neckwear. Natalie’s scarf is no mere accessory: under the tutelage of Jer Thorp, knitting is the medium through which she’s chosen to explore seven years of sales data from the “the world’s handmade marketplace” platform Etsy. Beyond wearable web analytics, other projects demonstrated include a mockup of a monument for fatally injured cyclists, a ‘tearaway’ mood diary, and an ornate series of visualizations tracking the increasing density of satellites orbiting Earth over the last six decades. Welcome to the final reviews of H79.2988 ‘Data Representation,’ an elective course offered within the Interactive Telecommunications Program (ITP) at New York City’s Tisch School of the Arts.

Thorp’s broad-minded approach to information design informs his course, and he challenges students to think about data as something that can not only be rendered onscreen but sculpted, crafted, or fabricated. Over the last several years, the scruffy, bespectacled, and irrepressibly curious Canadian software artist has authored and collaborated on a series of innovative visualization projects that have earned him global recognition and allowed him to be both brave and selective with his subsequent undertakings. At the beginning of 2013, Thorp seized on this momentum and formalized an ongoing working relationship with statistician Mark Hansen and media artist Ben Rubin to launch the Office for Creative Research (OCR), “a mix between an R&D group, a think tank and an artist collective.”

The morning after the studio crits, we find ourselves a few blocks east of Thorp’s DUMBO studio, perched on stools at the Brooklyn Roasting Company. Thorp is in good spirits: his teaching obligations for the semester have just concluded and he’s savouring his first tea of the day, opining on the current ‘halcyon days’ of data-based practices. “If you think of it in terms of an innovation curve, there is always going to be a burst of experimentation in the beginning, when people are trying to find footholds in whatever kind of solution terrain is available.”

The challenges of navigating this metaphorical rugged landscape, and lack of established, stifling best practices, propel Thorp forward, as both a programmer and educator. Our conversation drifts through his teaching philosophy, his role as the unofficial ‘lobbyist’ for the Processing community, and some work he recently did for Popular Science. I find it a little unnerving that Thorp knows about every tenth patron that files through this café: as a coffee-in-hand chic designer departs he whispers, “Her work is amazing, she’s won three national design awards.” He then launches into an elaborate summary of his experience at ITP without skipping a beat.

Thorp is more than qualified to speak authoritatively about data-based practice. Several of his recent visualization projects have been received as groundbreaking ‘instant classics’ by information design aficionados. This is a discerning audience, one that is simultaneously ravenous for new approaches to representing quantitativeinformation while also demanding novel interactions. One such initiative, Project Cascade, developed in the spring of 2011, prototyped an elegant 3D interface that mapped the conversational nature of the social web by tracking the way links to articles from the New York Times spread across Twitter. While the visualization is fabulous at representing the dense, ephemeral social constellations that populate the web, it is equally useful as a cipher for understanding the chain of events that saw Thorp—a Vancouverite—dig in and adopt New York City as his new home. 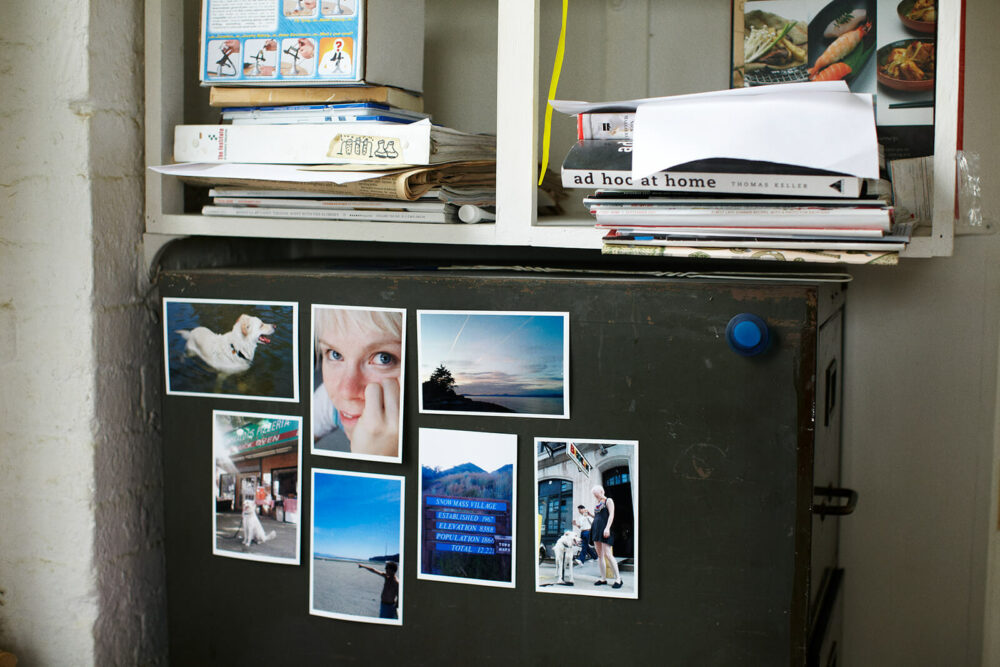 Photographs of Thorp’s partner Nora, his dog Trapper John, M.D., and some natural skylines form an carefully composed mosaic on the rusty filing cabinet beside his desk. 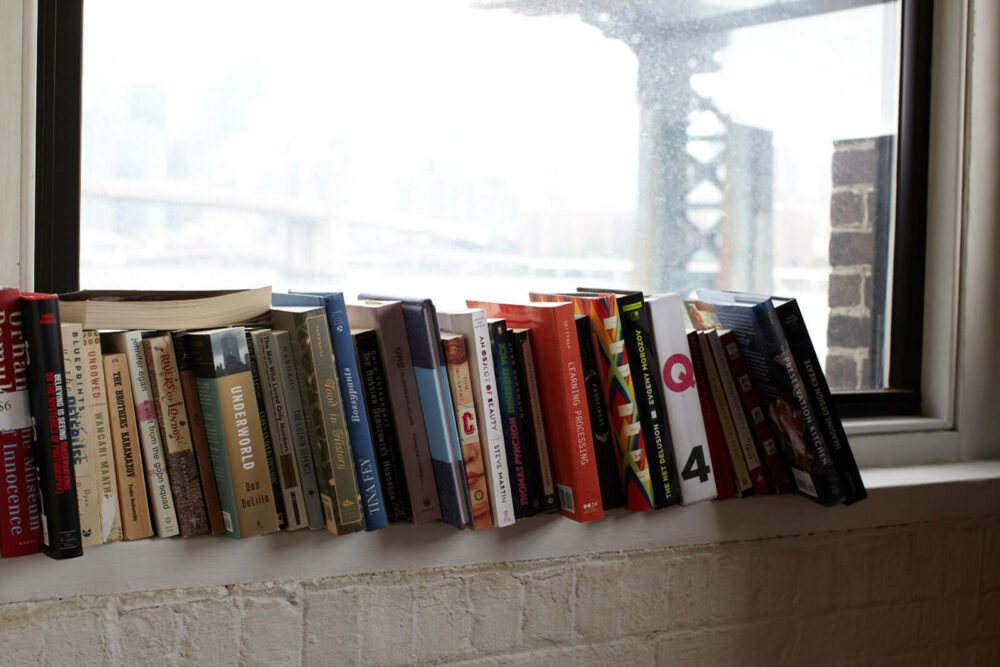 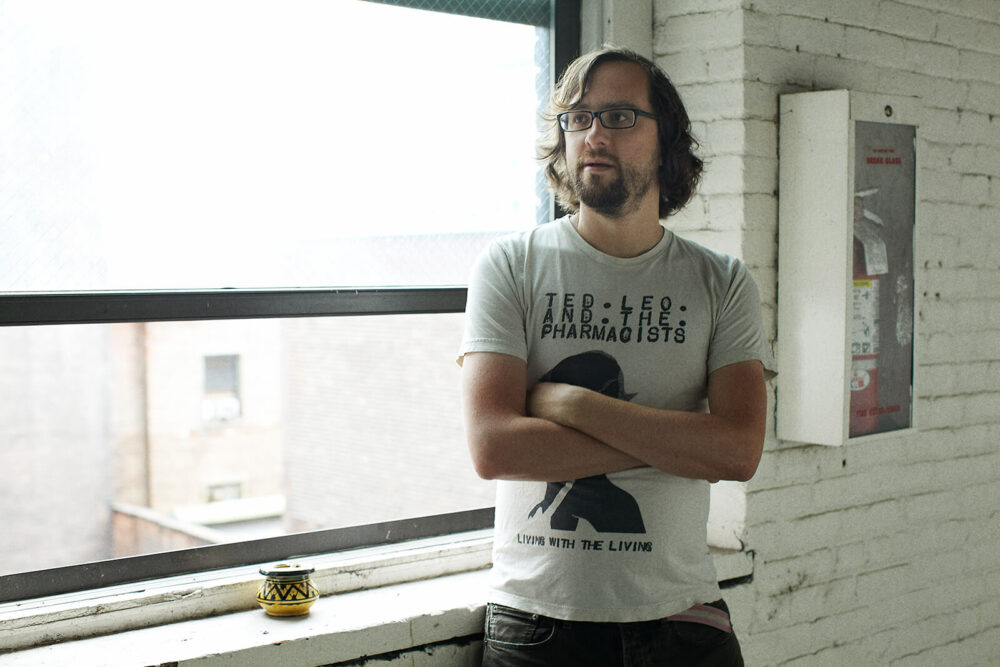 Just steps from the East River, Thorp’s Brooklyn studio provides a postcard view of the Manhattan and Brooklyn bridges (on a clear day).
To get full access to this feature, please or become a .

Daily discoveries at the nexus of art, science, technology, and culture: Get full access by becoming a HOLO Reader! 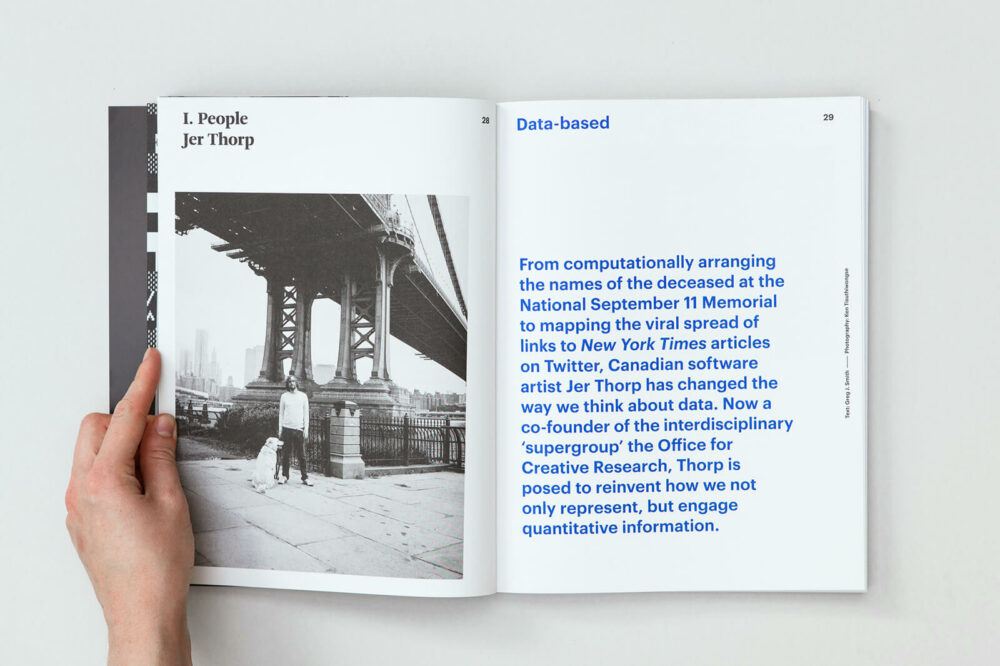 This feature was originally published in the inaugural issue of HOLO (2014, p.28-41). For details, see the HOLO Shop.

Greg J. Smith: A Canadian writer and cultural worker based in Hamilton, Greg is an editor for HOLO, and his writing has appeared in publications including Creative Applications Network, Musicworks, and Back Office. He is a PhD candidate within the Department of Communication Studies and Multimedia at McMaster University, and serves as co-chair of Board of Directors at InterAccess. For HOLO, he has profiled Jer Thorp and Rafael Lozano-Hemmer.

Ken Tisuthiwongse: Ken is a commercial and editorial portrait photographer based in Los Angeles with a deep love for analog film (“I prefer it for portraits and small editorials; the images feel more organic to me.”) He’s worked for editorial clients such as Mr. Porter, Monocle, and GQ as well as notable fashion and beauty brands. For HOLO, he photographed CGI provocateur David OReilly and data artist Jer Thorp. These days, it’s his kid that keeps him busy: “I’m currently trying to figure out how to drop him off at school and then run to the photo lab in 45 minutes.” 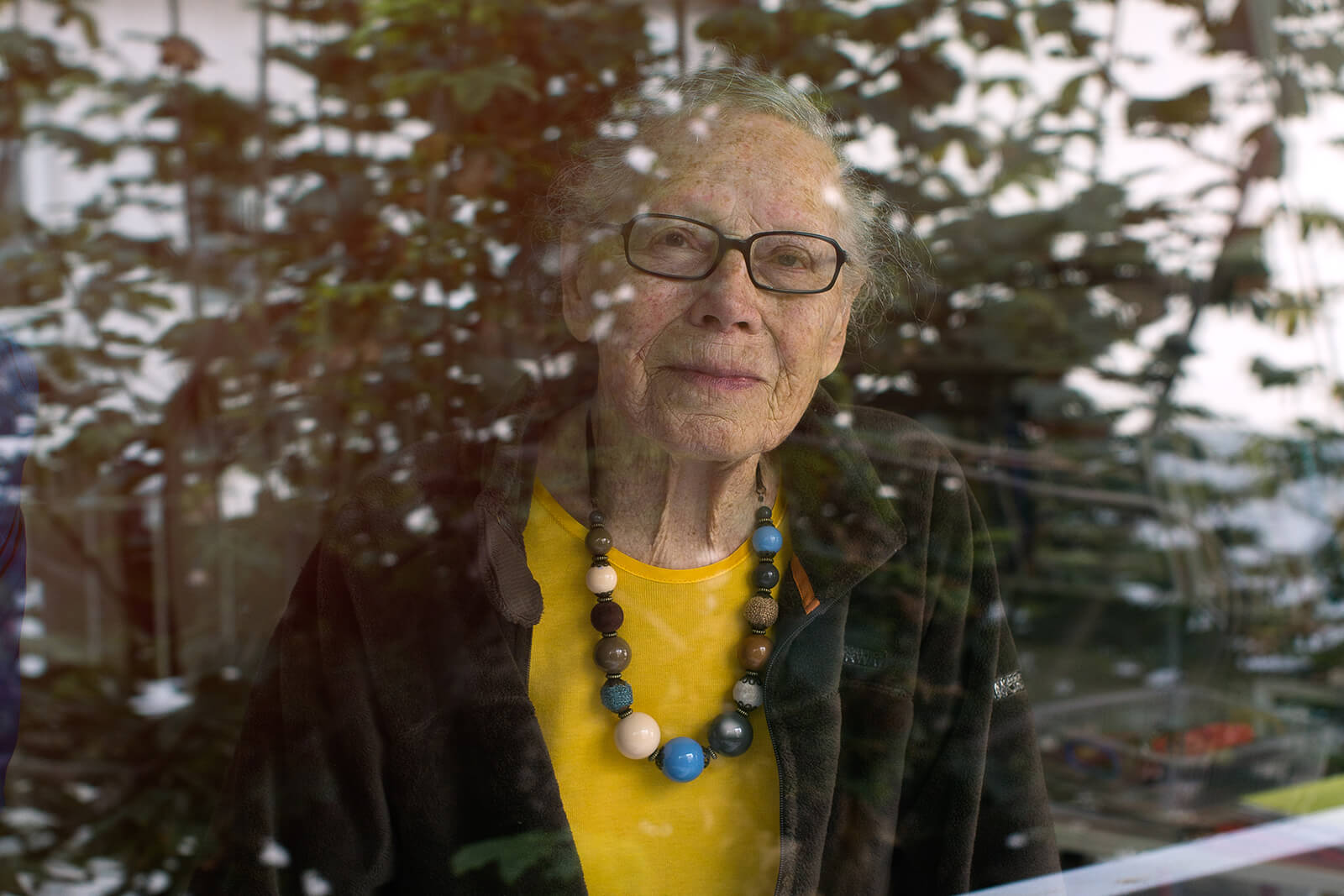 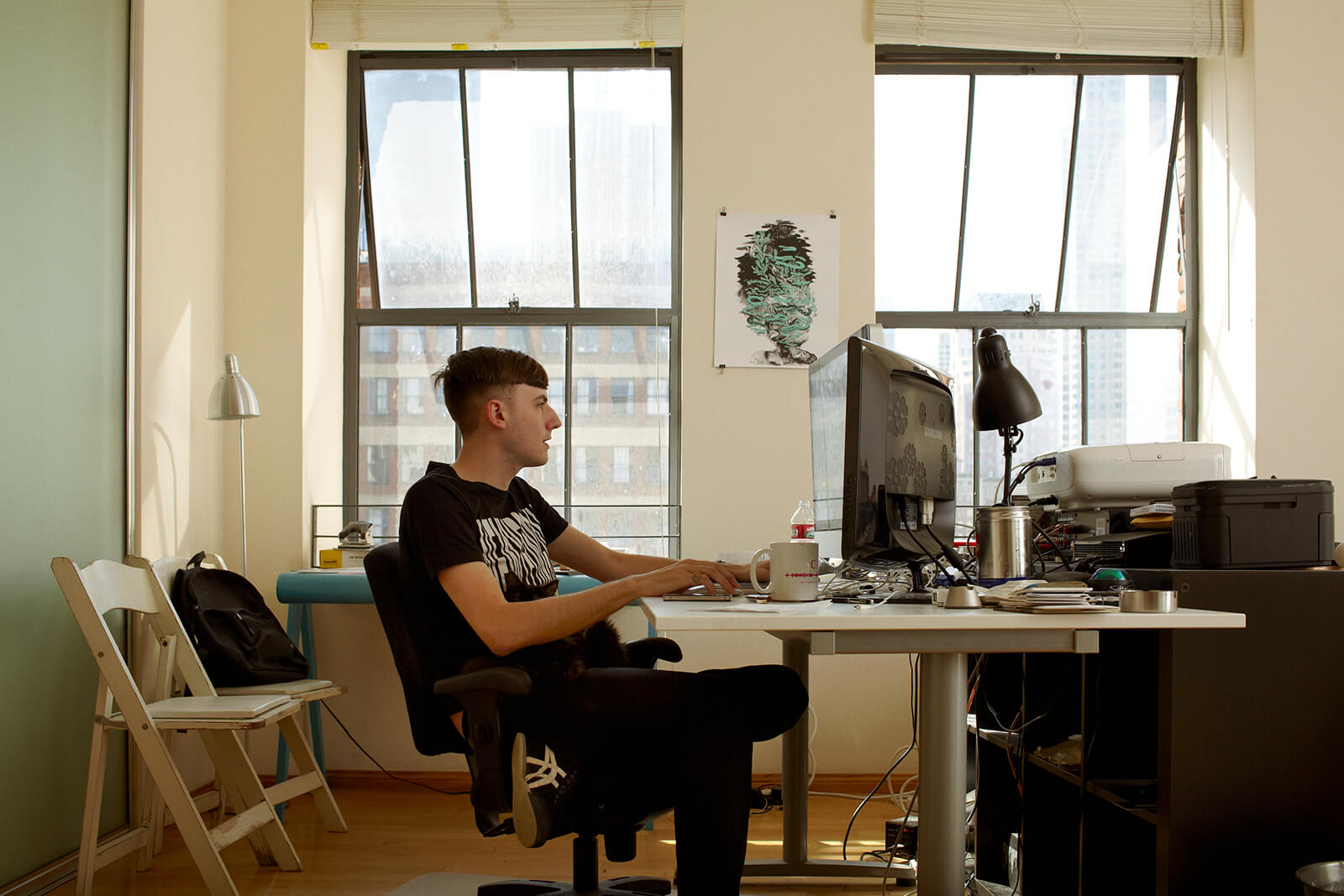 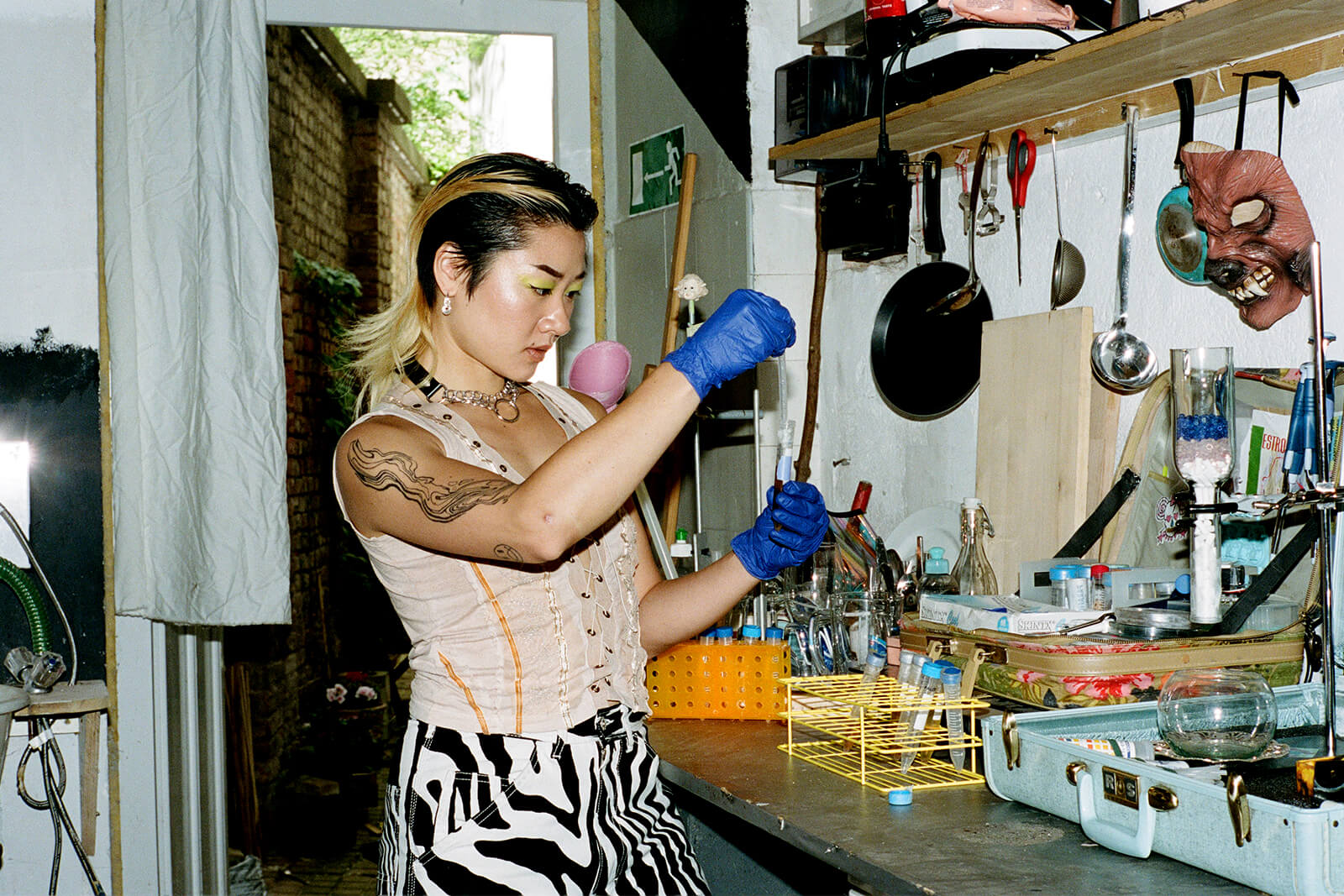 We use cookies to ensure that we give you the best experience on our website. If you continue to use this site we will assume that you are happy with it.OKNOPrivacy policy
$40 USD